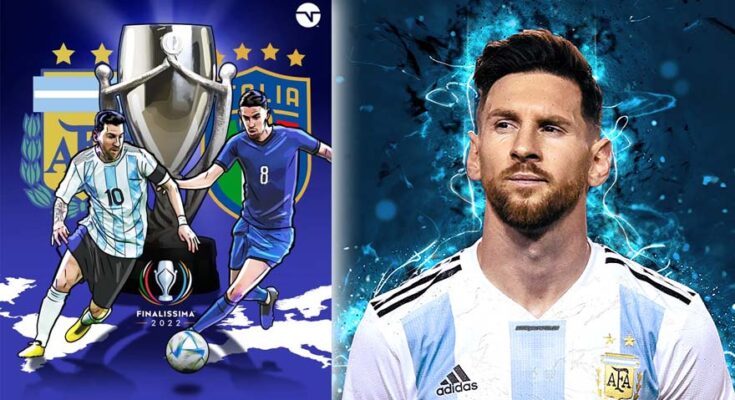 Lionel Messi is expected to lead the line when Copa America holders Argentina take on European champions Italy in the Finalissima on Wednesday night (June 1).

Ahead of Argentina’s clash against Italy at Wembley Stadium on Wednesday, Lionel Messi, Paulo Dybala, Angel Di Maria and their teammates were pictured in training as they look to maintain their unbeaten streak.

Finalissima, a one-off fixture agreed upon between UEFA and CONMEBOL, pits the two best teams from their respective continents against one another. The clash between the champions, which will take place at Wembley Stadium, will not have extra time. This means that if the game remains level after 90 minutes, the match will go straight to penalties.

In preparation for the fixture, Argentina trained at Athletic Bilbao’s San Mames stadium before flying to London on Monday (May 30).

The captain of the team, Lionel Messi, participated in full team training and had no fitness concerns. Considering the Paris Saint-Germain forward is Lionel Scaloni’s undisputed talisman, he is most likely to be in Argentina’s starting XI at Wembley.

The former Barcelona forward Messi is yet to play against Italy in his professional career. Argentina have squared off against the Italians twice (2013, 2018) since his international debut, but he missed both matches due to injury. La Albiceleste, however, won both friendlies, securing 2-1 and 2-0 victories, respectively.

What the stats say

During the course of Uefa Euro 2020, Italy broke their records for longest winning streak (13) and unbeaten run (34).

Italy became the fourth side to win multiple Euro titles after Germany (three), Spain (three) and France (two). The 53-year gap between their titles is the longest in Euro history.

Leonardo Bonucci (34 years and 71 days) set an Italian record by making his 18th Euro finals appearance in the Uefa Euro 2020 final, and became the oldest player to score in the decider.

Chelsea’s Jorghino became only the 10th player to feature on the winning side in the European Cup and Euro in the same year.

Defeat by Spain in the Uefa Nations League semifinals ended Italy’s world-record run of 37 games unbeaten, stretching back to 2018.

What the coaches say

Roberto Mancini, Italy coach: “We are sad not to have [Federico] Chiesa, [Ciro] Immobile, [Domenico] Berardi and [Marco] Verratti, but the players we field will do their best to have a great game. Argentina are strong but so are we. This match will be the end of a cycle. That doesn’t mean that 15-20 players will go back home, but from Wednesday we will field more young people to see whether we can count on them for the future.”

Lionel Scaloni, Argentina coach: “As a player, I enjoyed playing at stadiums like these and against these kinds of opponents. We would prefer [to play against European teams] more often. [Our unbeaten run is] just a number, a mere statistic and it doesn’t really matter to us. The most important thing is knowing what we want, where we want to go. We have to seize the moment and this experience. Whenever you play with the Argentinian shirt, every match matters. And if we can win a trophy, all the better.”

TV guide
– for ALL THE INFORMATION for your region