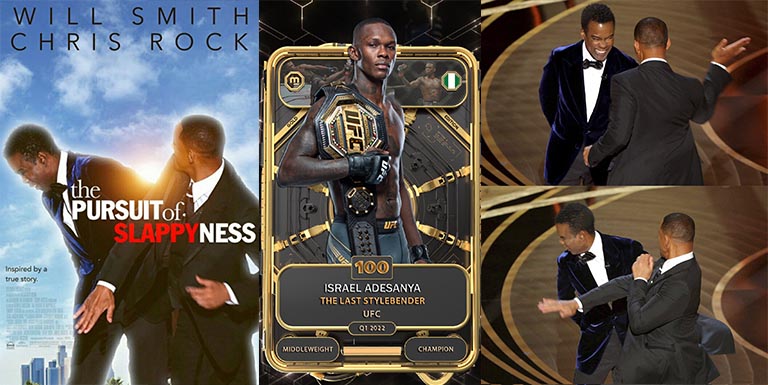 Israel Adesanya sets up hilarious poll after Will Smith slapped Chris Rock at The Oscars.

In case you missed it, Smith slapped Rock at the Academy Awards after the latter made a joke about the actor’s wife, Jada Pinkett Smith. Adesanya was apparently curious if Smith would have done the same if WWE Superstar Dwayne ‘The Rock’ Johnson had told the joke instead.

On Twitter, the UFC middleweight champion posed a question, asking:

“If it was The Rock instead of Chris Rock, would he have slapped him?”

Many believe Smith wouldn’t dare slap the pro wrestler. As of writing, 86.5% of votes went to the option, “Nah, that’s a hard Rock,” while 13.5% are convinced that Smith would have handled the situation in the same manner.

Adesanya’s post appears to have been inspired by a similar tweet from WWE legend Mick Foley. The retired pro wrestler recently took a shot at Smith, accusing him of being a bully.

Smith went on to win the best actor award for his portrayal of Richard Williams in King Richard. Unfortunately, his achievements were overshadowed by his actions during the ceremony.

Rock refused to press charges against Smith, according to the Los Angeles Police Department. The comedian and the actor also issued apologies to each other a day after the incident.

Israel Adesanya’s relationship with ‘The Rock’

It’s no secret that Israel Adesanya is friendly with ‘The Rock’. The WWE Superstar and renowned actor has extended his support for Adesanya on multiple occasions.

Their most recent interaction came when Adesanya successfully defended his middleweight crown against Robert Whittaker in the main event of UFC 271 in January. Moments after the fight, ‘The Rock’ hopped on Twitter to post:

“Damn!! Incredible to see Izzy only breathing thru his nose midway thru 4th. Not even sitting down between rounds. Discipline. Control. Both these guys.”

It’s evident that ‘The Rock’ is a massive UFC fanatic. His most notable appearance on a UFC broadcast came in 2019, when he presented the BMF title to Jorge Masvidal at UFC 244 in New York City.