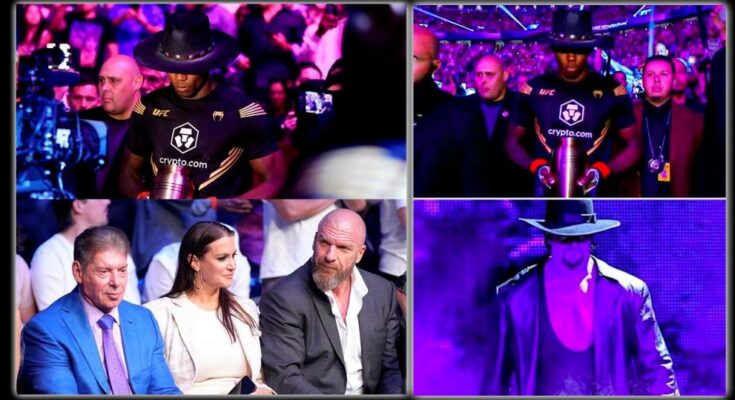 Israel Adesanya has confirmed that he’s interested in testing the waters in professional wrestling in the future.

In the last couple of years we’ve seen Israel Adesanya heavily lean on his love of pro wrestling in a variety of ways.

From open workout performances to actual walkouts and beyond, ‘The Last Stylebender’ has made it known that he’s been a fan of the business for many years – dating all the way back to the Attitude Era.

Following the fifth successful defense of his 185-pound title via unanimous decision over Jared Cannonier at UFC 276 on July 2 in Las Vegas, Adesanya was asked by BT Sport about his Undertaker-inspired walkout and the fact that WWE’s Vince McMahon, Stephanie McMahon and Paul LeVesque (a.k.a. Triple H) were in the crowd at T-Mobile Arena — not long after WWE’s Money in the Bank event finished up at MGM Grand Garden Arena.

Then, following his victory, he told BT Sport that he’ll definitely be entertaining the idea of entering the squared circle one day.

“Definitely, that’s something I’ll try my hand at later on,” Israel Adesanya said.

“Just for fun. I’m not saying it’s going to be a full-time job, but I’m definitely going to jump in the WWE, or something along that line, just for the entertainment factor.”

At the age of 32, there’s a good chance we’re going to be seeing a lot more of Israel Adesanya in mixed martial arts before he eventually decides to hang up his gloves.

Whether it be defending his crown at middleweight or heading up to 205, this is a man who wants to cement his legacy as one of the best of all-time.

When the time eventually comes for him to make a decision regarding WWE or perhaps even AEW, you can bet it’s something he’s going to try out in one way or the other.