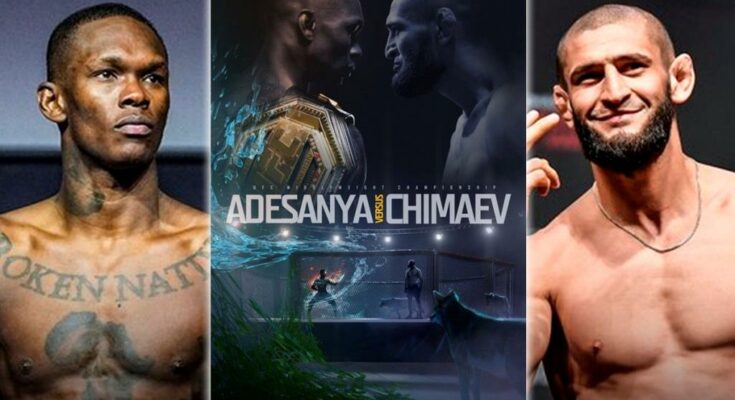 UFC middleweight champion Israel Adesanya said he’s ready to fight top welterweight Khamzat Chimaev in the future if he cleans up his division.

This weekend (Sat., July 2, 2022) at UFC 276 in Las Vegas, Adesanya seeks his fifth official title defense when facing Jared Cannonier. Assuming he comes out on top, “The Last Stylebender” has some ideas for whom he’d like to test himself against.

“Sean Strickland, I’d like to take him out as well. Then one more. Hmm. There’s a few guys coming up that I feel I might have to test myself against. Colby Covington can’t even beat the champ at Welterweight, I will f**king wreck him. I will make him my b**ch.”

Also competing at UFC 276 will be top 185 pound contenders, Strickland and Pereira, who are likely battling over the next title shot in the division. For Pereira and Adesanya, the two have a history going back to their kickboxing days. The Brazilian striking sensation holds two wins over the current champion, last defeating him via a violent third round knockout.

However, there’s one more fighter Adesanya can see standing across from him in the future that has the potential to make for a monstrous spectacle.

“If Khamzat Chimaev does well, I actually like the way he fought Gilbert Burns,” Adesanya said.

“It made me like, ‘Alright, this guy’s got some heart, he’s got some fire in him. If he actually — I don’t think he’s gonna get past Kamaru Usman, I don’t think he’s even gonna get by someone like Leon Edwards. Someone — he’s gonna have time with Vicente Luque. Like, if he gets past any of those guys and works his way up to becoming ‘champion’ in some parallel universe then he defends it a couple of times then wants to fight me, I welcome that fight. I like a guy like that cause he’s a big-money fight, you know? And I hate calling out guys in the weight class below me but this is not a callout. And he’s fought at 185, but yeah, that’s a big money fight, I like that.”

Khamzat Chimaev is currently a top-ranked contender at Welterweight but has spent time at Middleweight as recently as Sept. 2020.

Finishing Gerald Meerschaert in a mere 16 seconds, Khamzat Chimaev has since dominated Li Jingliang before going to war with the aforementioned Burns, earning a unanimous decision victory.