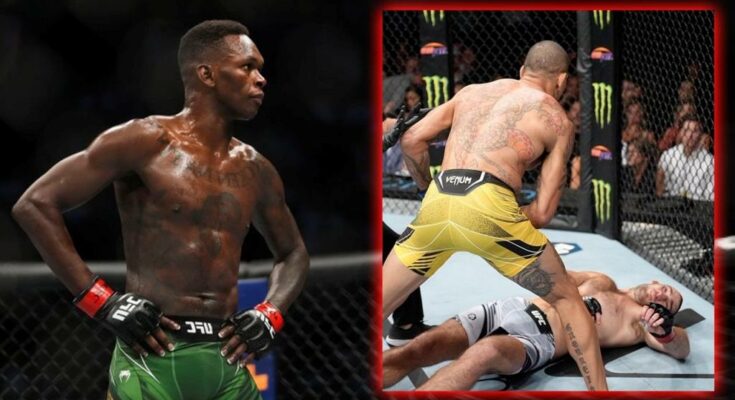 UFC middleweight champion Israel Adesanya said he was not impressed with Alex Pereira‘s performance against Sean Strickland at UFC 276.

On the main card of UFC 276, Pereira scored a first-round KO over Sean Strickland to cement himself as the next title contender.

‘Stylebender’ and ‘Po Atan’ of course have a history, with Pereira holding two wins over Adesanya in kickboxing, including one by KO.

Yet, even though Pereira got the first-round stoppage at UFC 276, Adesanya says he wasn’t impressed with his KO win as Strickland didn’t fight the smartest. With that said, the champ was also critical of his own performance.

“Nah, not really (impressed). It’s just Sean Strickland is, ‘parry, parry.’ Oh, that’s easy to go, ‘boom, left hook.’ I wasn’t impressed. I wasn’t really impressed by my performance because of the expectations I put on myself. But, it was still a master class,” Adesanya said to mainevent after UFC 276.”

Despite the fact Israel Adesanya wasn’t impressed with Alex Pereira’s performance, it still was good enough to earn him a shot at the middleweight champ. Yet, Adesanya is confident he has gotten much better since their kickboxing fights and he’s excited to prove his doubters wrong.

“I am not the same fighter I was back then,” Adesanya said. “I’ve learned and matured from that fight. So, I know what I can do. Like I said, I had an off night. When I fight him I am going to make sure I’m on.”

Israel Adesanya (23-1) is coming off the win over Jared Cannonier at UFC 276 to defend his middleweight title for the fifth time. Before that, he beat Robert Whittaker and Marvin Vettori by decision to defend his belt. In his career, he holds notable wins over Derek Brunson, Paulo Costa, Yoel Romero, Anderson Silva, and Kelvin Gastelum among others.