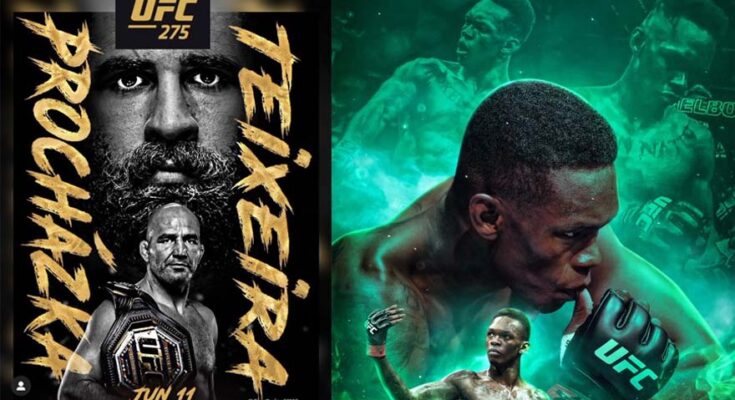 Israel Adesanya is looking forward to the upcoming light heavyweight title clash between Glover Teixeira and Jiri Prochazka. Prochazka and Teixeira will lock horns in the headliner of the upcoming UFC 275 pay-per-view event set to take place this Saturday at the Singapore Indoor Stadium in Kallang, Singapore.

UFC middleweight champion Israel Adesanya recently broke down the fight in a video shared on his YouTube channel.

According to the Nigerian-born Kiwi, Prochazka has an unpredictable but effective striking style which helps him stun opponents. However, unpredictability comes at a cost.

Adesanya pointed out that the Czech fighter often leaves himself exposed and vulnerable to getting hit with a potential countershot. Teixeira, on the other hand, is a more technically sound and disciplined fighter, claimed Adesanya.

‘The Last Stylebender’ believes whoever can establish being the aggressor and can put their opponent on the backfoot will have the edge in this fight. He believes Prochazka has a better chance of winning because of his aggressive style, footwork, and the fact that Teixeira isn’t great at “working from the backfoot.”

“His striking is awkward but it works for him. He’s rangy, fights hands down, offers his head but he still leaves himself everything you do leaves you open…He’s leaving himself open, rudimentary mistakes…If I’m gonna bet I’m gonna go with Jiri. Young, energy, tall, rangy and Glover’s had problems with that in the past. Well, this is why we fight because now we’re in the present so he’s just [got to] be patient. If he’s patient and doesn’t fight the way he fought Dominick Reyes, he’ll win.”

Watch the full video on Adesanya’s youtube channel below: