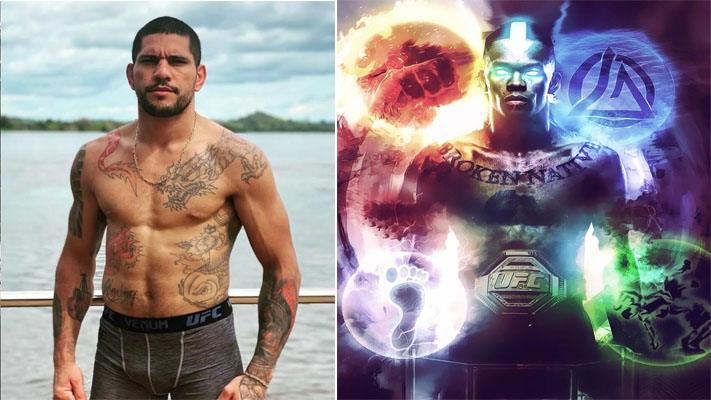 Israel Adesanya has been a fan of anime for most of his life.

‘The Last Stylebender’ often incorporates philosophies and catchphrases from popular anime/manga TV shows into his behavior and mindset; for instance, when he wrote Robert Whittaker’s name into his ‘death note’ in tribute to the popular anime.

Following Israel Adesanya’s loss to Alex Pereira at UFC 281, many wondered what lay ahead for ‘The Last Stylebender’. The former UFC champion recently appeared on the popular show Hot Ones with Sean Evans.

Adesanya was asked how being a ‘weeaboo’, or ultra-fan of Japanese culture, has helped his MMA career. ‘The Last Stylebender’ stated that he has been able to embody becoming ‘the protagonist of his own story’ thanks to anime:

“It’s helped me tell my own story, to be the protagonist in my own story. Be Player One in my game. Like right now, I’ve already seen the set up for my next storyline, ‘The hunter becomes the hunted’. And certain characters in anime as well, I draw inspiration from.”

Israel Adesanya has now lost three times to Alex Pereira over the course of his career in combat sports. But with the help of ‘Poatan’, Adesanya has been able to visualize the next chapter of his story.

Pereira hails from an indigenous tribe in the Amazon, Brazil, and part of his walk-out routine is to mimic drawing and firing an arrow from a bow like a hunter. Israel Adesanya has turned the hunter into the hunted.

Watch the interview below from 12:50:

Israel Adesanya knows he can beat Alex Pereira – “If you can make him bleed, you can kill him”

Israel Adesanya lost his middleweight crown at UFC 281 in one of the craziest fight cards in UFC history.

‘The Last Stylebender’ is now 0-3 against Alex Pereira in combat sports but is fully confident that he can beat ‘Poatan’ if they fight again. Adesanya looks forward to a possible rematch with Pereira and says that he is “excited” for the fight.

In a video uploaded to his YouTube channel, ‘The Last Stylebender’ said:

“I’m excited for this chapter and I like the way the story goes. I made him bloody, I made him bleed. If you make him bleed, you can kill him. But this one I want to make it a bloodbath.”