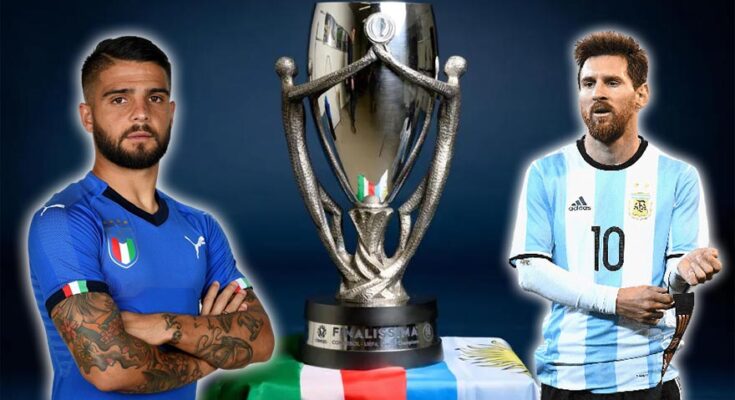 When Italy take on Argentina on Wednesday, the two teams will be competing for the CONMEBOL-UEFA Cup of Champions trophy, which has undergone some significant changes since it was first introduced almost 40 years ago.

Weighing around 8.5kg and being 45cm in height, the trophy is made out of brass and coated in silver plating. The majority of the trophy maintains its original feel, from when it was originally made ahead of the first edition in 1985, which saw France play Uruguay in Paris.

However, the piece of silverware now has a new base, including a dark grey nickel-plating finish, which helps to modernise a classic trophy, while not altering its original feel. The design of the revamped trophy was undertaken by Valentina Losa.

The participants Italy vs. Argentina

The showdown at Wembley stadium was agreed after UEFA and CONMEBOL signed a renewed and extended Memorandum of Understanding on 15 December 2021.

Argentina ended a 28-year wait for a trophy by winning the 2021 Copa América, beating Brazil 1-0 in the decider to clinch a record-equalling 15th Copa América title.

This will be the third time the EURO holders have met their South American counterparts in a match organised by UEFA and CONMEBOL. In 1985, France defeated Uruguay 2-0 in Paris, and eight years later Argentina edged out Denmark on penalties on home turf at Mar del Plata.

Billed as ‘the cup of champions’ by UEFA, this match between the European and South American champions, Italy and Argentina, is their chance to win an international Super Cup in the inaugural ‘La Finalissima’, a renewal of the abolished Artemio Franchi Cup which was last played in 1993! A sold out Wembley Stadium plays host to this showpiece game, prompting happy memories for Italy as this was the venue for their famous EURO 2020 final win over England on penalties.

With no extra-time in this clash, another penalty shootout surely wouldn’t faze Italy after winning on penalties twice in last year’s Euros. Yet despite the positives, the Azzurri’s recent success was undermined when being denied a spot at the 2022 World Cup by North Macedonia in the qualifying play-off (L 1-0), meaning this is now their only obtainable silverware until at least the 2023 Nations League finals.

Argentina’s ticket to the 2022 World Cup is already booked following an unbeaten qualification cycle so far, and they now have the opportunity to pick up more silverware after ending a 28-year wait for a trophy with their Copa América win. La Albiceleste are becoming famed for being clinical in attack while steely in defence, proven by the fact they have not conceded more than once in any of their last 18 games, whilst also grabbing 12 clean sheets (W14, D4).

Unbeaten in 31 internationals and hunting down Italy’s world record 37-game haul without defeat, Argentina enter this match as slight favourites. Argentina also have a 100% win rate against Italy in their three encounters during this century, which has made the overall H2H record look a little better for the South Americans (W4, D5, L6). The most recent of those victories was also played in England, but at the Etihad Stadium (2-0), suggesting that Italy’s potential ‘home continent advantage’ will be limited at best.

Players to watch: Italy’s Lorenzo Insigne was often quick off the mark for club side Napoli this season, with five of his last seven goals serving as the team opener. This could be Lionel Messi’s first ever meeting with Italy but he may be confident after scoring three goals in his two career visits to Wembley Stadium, contributing to victory on both occasions.

Hot stat: Argentina were leading at half-time in seven of their last eight matches.