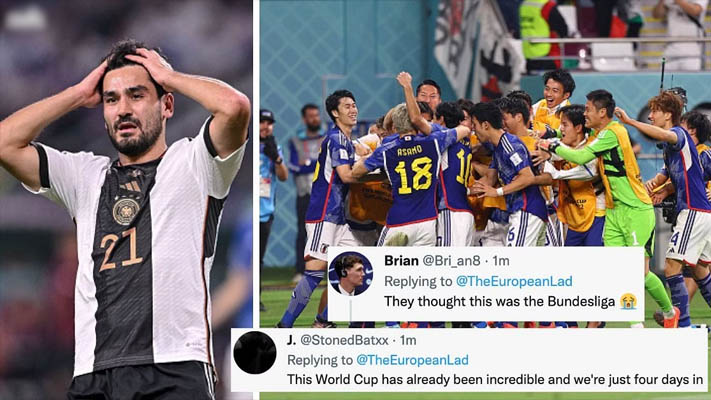 Football fans exploded on Twitter as Japan completed a stunning fightback to secure a 2-1 win against Germany in the 2022 FIFA World Cup on November 23.

Ilkay Gundogan opened the scoring for Hansi Flick’s team in the 33rd minute of the game from the spot. The 2014 World Cup champions dominated the better part of the first half. Despite creating multiple chances and making 14 attempts on goal, they failed to convert them.

The same story continued as the second half rolled on.

Takuma Asano scored a spectacular second for Japan in the 83rd minute of the game. He beat Nico Schlotterback in style before smashing it into the goal from a tight angle.

Here’s how fans reacted to the stunning game between Germany and Japan:

“Thomas Müller is a good example of what I expect from the players and in the team, if a coach could carve himself a player: Thomas Müller would be the result. The overall package he offers is outstanding. Everyone can take an example from him and his attitude; Thomas is exceptional and very special in every respect. For the team, he has value beyond his athletic abilities.”

Flick complimented Muller’s experience and his desire to learn every day:

“Thomas Müller brings what Jeff Bezos described as a ‘Day 1 mentality.’ The first day of falling in love, the first day at a new job, the first day at school, The trick is to retain the magic of the beginning. And Thomas exemplifies this every day.”

“Of all the players in our squad, he’s been around the longest, he’s experienced a lot, and yet you can always sense with him that he’s on fire as if it were the first day.”