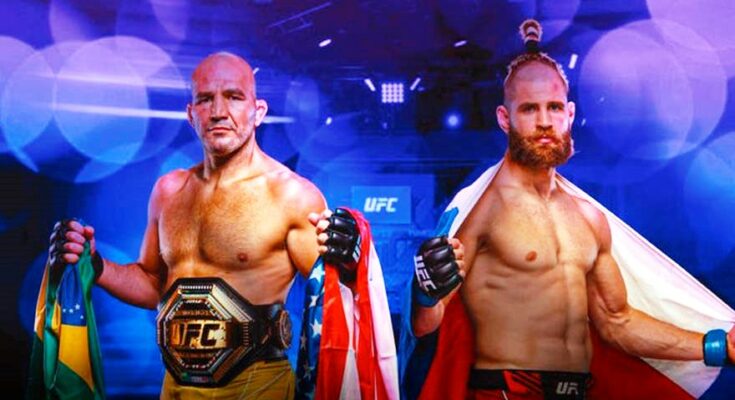 UFC 275 goes down in Kallang, Singapore, on June 11. It’ll be the Las Vegas-based promotion’s first pay-per-view in southeast Asia, and it has put together a pretty solid card to celebrate the occasion.

Headlining honors will go to a light heavyweight title fight between the division’s champion, Glover Teixeira, and challenger Jiri Prochazka. And that won’t be the only title on the line, as flyweight champ Valentina Shevchenko is slated to defend her strap against surging contender Taila Santos in the co-main event.

UFC 275 packs plenty of punch beyond the two title fights that top the bill. Earlier on the main card, fans will be treated to a rematch between former strawweight champs Zhang Weili and Joanna Jedrzejczyk, whose first fight was arguably the best in the promotion’s history.

Jiri Prochazka has built a reputation based around an unpredictable and explosive style that immediately turned him into one of the most exciting fighters on the UFC roster.

But taking chances also comes with an inherent risk, which is something he’s faced in both of his wins inside the octagon against Volkan Oezdemir and Dominick Reyes.

Each time, Prochazka scored a dramatic knockout, but not before he faced serious trouble — most notably against Reyes, when he ended up mounted on the ground as he tried to fend off the two-time light heavyweight title challenger.

Now, as he prepares to face Glover Teixeira with the 205-pound title on the line at UFC 275, Prochazka — the No. 2 light heavyweight in MMA Fighting’s Global Rankings — admits he’s had to make a few changes to ensure he doesn’t get put in those bad positions again.

“Everybody knows my strong weapon and my weakest weakness. That’s why I start to drill that [on the ground]. That’s why I’ve started to prepare the dangerous techniques in that, and I believe in myself in that much, much more than ever.”

Considering Teixeira’s pedigree on the ground — including his submission win over Jan Blachowicz to become UFC champion — Prochazka knows he had to address those issues before facing him in arguably the most important fight in his career.

“I’m glad for that to have an opponent like Glover,” Prochazka said, “because he gave me the opportunity to prepare myself in these styles, to be better and better.”

Beyond his preparation to deal with Teixeira’s grappling and wrestling, Prochazka also had to start thinking about his own offense if their fight hits the canvas. If there’s one glaring problem he’s seen with so many of Teixeira’s past opponents, it’s the instinct to shift into survival mode when working on the ground with the Brazilian champ.

Because Teixeira is so proficient in his grappling, Prochazka has seen fighters simply concede position on the ground until attempting an escape to get back to the feet again. While Prochazka may not be looking to shoot for double-leg takedowns against a noted submission specialist like Teixeira, he promises to make the champion pay in every position in the fight — whether that’s standing or on the mat.

“With all respect, I have to be dominant on the ground,” Prochazka said. “Not like other opponents who are just taking Glover’s game, they just start defending. My game is not defending.

“My game is all the time attacking, all the time to be in the dominant positions. From the back, from the up guard, it doesn’t matter.”