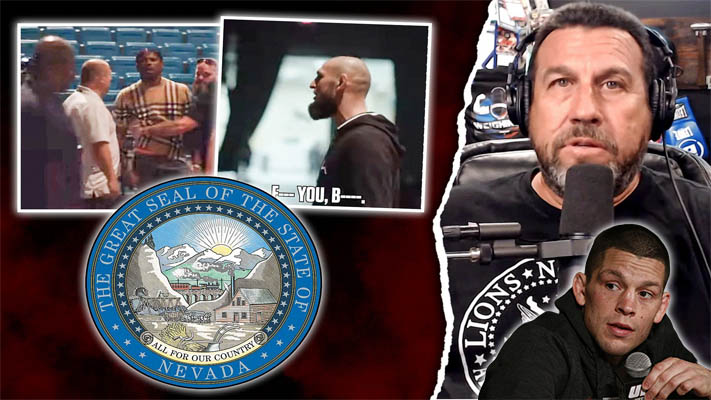 Former MMA referee ‘Big’ John McCarthy has revealed what the Nevada State Athletic Commission’s (NSAC) investigation into UFC 279 could mean for the organization and the fighters involved.

It was recently reported that NSAC is investigating the events of UFC 279 that led to the press conference being canceled. Khamzat Chimaev, Kevin Holland, Li Jingliang, and Nate Diaz were all allegedly involved in a backstage incident that turned physical. As a result, the UFC decided to cancel the UFC 279 presser due to concerns over fighters and fan safety.

Discussing the NSAC investigation on the latest episode of the WEIGHING IN podcast, John McCarthy stated that fighters will likely receive a fine but only when they return to Las Vegas:

“Could they fine them? Yes, they could. And what will happen is– This has happened to Nick [Diaz] many times. The fine is sitting there and then when the UFC pulls you back to Nevada to have a fight and you go to get licensed because your license has run out over the year, guess what they’re going to say? ‘Yes, you can get licensed, in fact, you owe us $25,000, you remember this fine? You still haven’t paid it’.”

The chaos and controversy from UFC 279 will likely go down in MMA history. The canceled press conference then led to the weigh-ins that saw fighters such as Khamzat Chimaev miss weight by over 7.5 lbs. The main event was rescheduled to a Nate Diaz vs. Tony Ferguson bout and ‘Borz’ was moved to the co-main event slot to face Kevin Holland instead.

MMA fans were left stunned when Khamzat Chimaev stepped onto the scales at UFC 279 and missed weight by over 7.5 lbs. While it was later revealed that a doctor had allegedly told him to stop cutting weight, it was the attitude of ‘Borz’ that left a sour taste in the mouths of some fighters and fans.

The Chechen-born Swede appeared to show little remorse for his staggering weight-miss and instead antagonized the crowd at both the ceremonial weigh-ins and during his post-fight interview.

On a recent episode of the WEIGHING IN podcast, Josh Thomson and John McCarthy gave their take on UFC 279, with Thomson admitting that he had “lost respect” for the 28-year-old:

“He understood he wasn’t going to make the weight, he gave up. That’s just in bad taste. That’s very unprofessional. I lost a lot of respect for him. I was pumped on him early in his career when he first got in the UFC… I was like, ‘Okay, this guy, I like what he’s doing, got a little flair to him, he’s a fun fighter’, but it’s kind of getting on me now when you show up that much overweight. Is this what we’re going to see later on? How do you know he just won’t do this?”

Check out the podcast episode here: