John McCarthy voiced his disagreement with the matchup Alex Pereira vs. Khamzat Chimaev 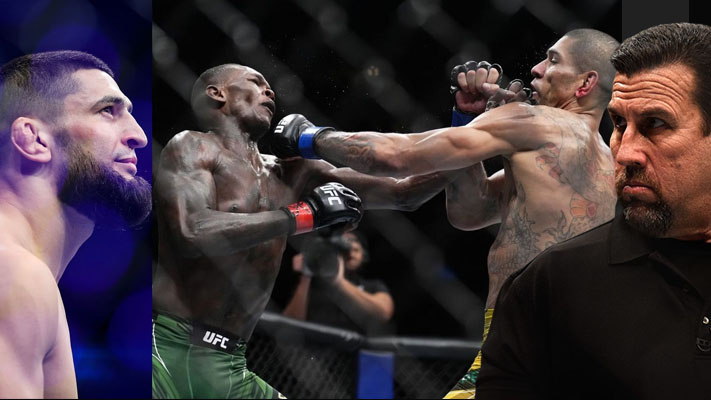 Newly-crowned middleweight champion Alex Pereira has been repeatedly called out by the UFC’s most feared fighter, Khamzat Chimaev.

Amidst reports of a potential first title defense for Pereira against Chimaev, veteran referee John McCarthy voiced his disagreement with the matchup on an episode of Weighing In.

‘Big John’ explained the stylistic differences that would prevent the bout from being evenly matched.

“Khamzat’s coming off of a middleweight fight against Kevin Holland. He didn’t make weight for a welterweight fight, that’s why he ends up in that middleweight matchup. That’s not exactly the person you want to jump the line and put into a championship fight against a guy like Alex Pereira. Wrestling is gonna be his weakness, stand-up is his game. When he’s fighting someone like ‘Izzy’ – Adesanya, you can say that makes sense in that fight.”

McCarthy also stated that the UFC would risk Alex Pereira losing to Khamzat Chimaev after his major win against the long-standing champion. He suggested an immediate rematch between Israel Adesanya and Alex Pereira as the better alternative.

“If you’re the UFC, why would you want a guy who just beat one of your superstars to lose right away? Doesn’t make sense. It really doesn’t make a whole lot of sense. I’m not saying they couldn’t do it and again I would watch the fight but makes more sense for them to put Israel Adesanya, who was winning that fight, three rounds to one as it went down in the fifth round and he gets the knockout. It makes sense for them to put that fight back together with Israel Adesanya instead of handing it to Chimaev.”

Former UFC middleweight champion Michael Bisping gave his take on who should be Alex Pereira’s next opponent.

Bisping spoke on his YouTube channel and backed Israel Adesanya for a rematch owing to his dominant reign as champion.

Bisping also highlighted the threat Khamzat Chimaev poses to any opponent he faces, going off his last performance against Kevin Holland at UFC 278. ‘Borz’ blitzed through his stand-in opponent and secured a first-round finish to continue his unbeaten run in MMA.

Check out Michael Bisping discuss a possible Chimaev-Pereira fight in the video below: