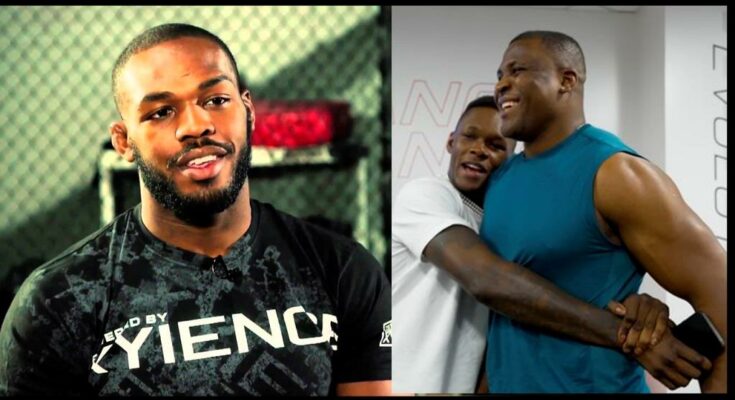 Jon Jones criticized Francis Ngannou and Israel Adesanya on Twitter. While Adesanya was the original target, ‘Bones’ did not spare Ngannou after the heavyweight champion stepped into the line of fire.

Referring to the middleweight champion as ‘Elsa’, Jones claimed that Adesanya and Ngannou combined wouldn’t be able to match his achievements even if he took a hiatus of another two years. The former light-heavyweight king wrote on Twitter:

“look at Francis over there defending Elsa, how cute. I could takeoff two more years and you guys work combined won’t match what I’ve done in that octagon. #Facts”

In a follow-up tweet, Jones claimed to be unimpressed with both Ngannou and Adesanya. Additionally, ‘Bones’ lauded Alex Pereira’s kickboxing knockout over ‘The Last Stylebender’. The 34-year-old wrote:

“I’m really not impressed with you or your boy, I’ve seen you quit multiple times. And your boy almost got flat lined the last time he faced Alex. Both of you guys win your next fights, then I’ll be impressed. Until then, keep the name out of your mouth, there’s levels.”

Jones’ response came in response to a tweet from Ngannou where ‘The Predator’ came to Adesanya’s defense after ‘Bones’ mocked the middleweight champ’s latest title defense.

Jon Jones had initially mocked Israel Adesanya for referring to Elsa (a character from the Disney animated film Frozen) in his callout to Alex Pereira.

Jon Jones jibed at Israel Adesanya following ‘The Last Stylebender’s successful title defense against Jared Cannonier at the recently concluded UFC 276 pay-per-view. Adesanya and Cannonier fought in the headliner of the event. The Nigerian-born Kiwi cruised to a lopsided unanimous decision victory in what turned out to be a lukewarm fight.

Cannonier failed to test the champ as Adesanya maintained distance and outstruck his opponent throughout the fight. During the customary post-fight interview with Joe Rogan, Adesanya called out former foe Alex Pereira. ‘Poatan’ competed on the same card as Adesanya and picked up a spectacular first-round knockout win against No.4-ranked middleweight contender Sean Strickland.

The Brazilian, who has two wins over Adesanya in kickboxing bouts, will challenge the 32-year-old for the title next. While calling out the Brazilian, Adesanya made a reference to Elsa, a character from Disney’s popular animated musical fantasy film Frozen.

Adesanya claimed that when he fights Pereira inside the octagon, he’ll leave the Brazilian fighter “frozen,” like Elsa. Jones was unimpressed with the call out and took to Twitter to criticize Adesanya, also taking a dig at the champ’s “glossy fingernails” in the process:

“Bro I can’t stop thinking about this sh*t. How are you going to threaten a guy like Alex with glossy fingernails and a frozen reference. I’m over here scratching my head,” Jones wrote.