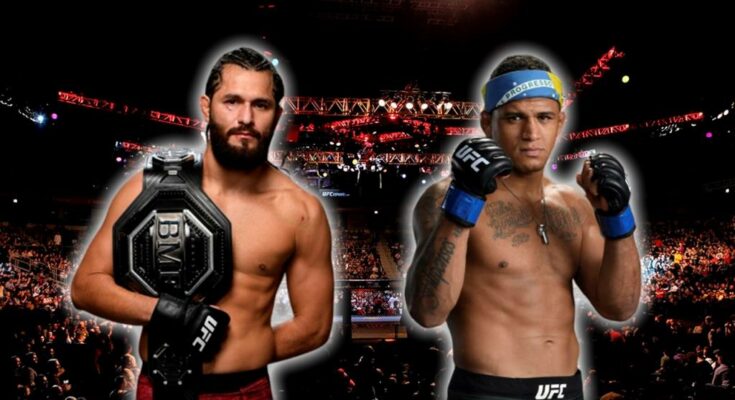 Jorge Masvidal is still awaiting word on who he’ll fight next in the UFC, but he’s definitely interested in a showdown with former title challenger Gilbert Burns.

With the UFC’s first and only “BMF” champion all but giving up on a potential fight against Conor McGregor, he’s also answered a call from Burns, who has been asking for the matchup for several weeks. In fact, Burns even offered Masvidal the chance to face him in a standup war by stipulating that he’d willingly sign a contract guaranteeing that the Brazilian grappler won’t attempt a single takedown in their fight.

In response, Masvidal says he would gladly accept a fight against Burns if that’s the offer made to him by the UFC, but he doesn’t want the noted jiu-jitsu black belt to give up any of his weapons — even if that means the fight would eventually hit the floor.

“I don’t want Gilbert to sign no contract that says no takedowns,” Masvidal said on The Fighter vs. The Writer. “Do your game, my brother. Do what’s gotten you here.

“I know he’s a world champion in [Brazilian jiu-jitsu]. I’m trying to work on my grappling, always trying to get better. So do everything that God has allowed you to do and blessed you to do.”

Burns was very respectful when calling out Masvidal, because he doesn’t believe a battle between them needs any unnecessary trash talk when the fight could speak for itself.

While Masvidal has engaged in plenty of bitter rivalries in the past, he’s appreciated the way that Burns approached a possible fight with him, especially after he spent months trying to coax McGregor into facing him yet heard almost nothing from the Irish superstar.

“Definitely a fight that interests me,” Masvidal said about Burns. “Before the Conor fight came up, that’s the one that called me out and I was like, this is a guy that comes to fight.

“The whole world doesn’t know him but they will, because he comes to fight. He’s going to try and choke you out, knock you out, and just has a good style. I like the fight.”

Before Masvidal commits to anything, he first has to clear up some legal hurdles in front of him in the form of assault charges pending from an alleged altercation with former teammate and opponent Colby Covington, stemming from an incident that happened in March.

Masvidal remains cautiously optimistic that he’ll be able to compete again before the end of 2022, but he doesn’t want to make promises to any opponent and not deliver in the end.

“Once some of these legal issues I’ve got going on [are settled], I’m setting a date,” Masvidal said. “That’s another reason why we’re not setting dates right now, because I’ve just got to figure out some things and then we’ll lock it in.”