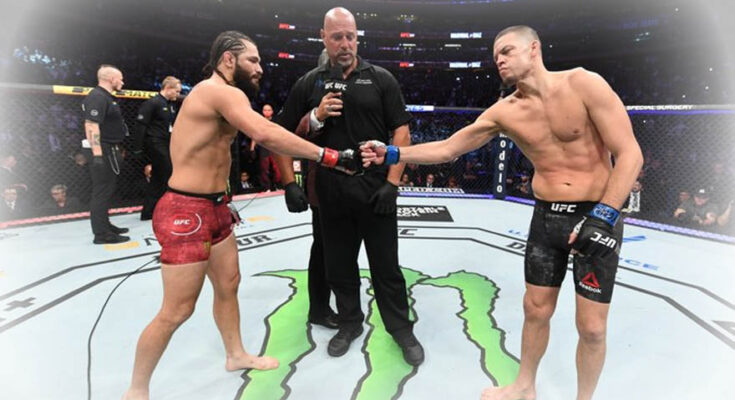 UFC welterweight Jorge Masvidal would like to send off his former foe Nate Diaz in style.

The Stockton slugger has been vocal about wanting to leave the UFC for months now. Despite being allegedly in talks to face Dustin Poirier or Khamzat Chimaev, neither fight has come to fruition.

On Twitter, Diaz has voiced his displeasure with the promotion on several occasions.

It seems that Jorge Masvidal would like to have the opportunity to send Nate Diaz off. The two notably fought at UFC 244 in November 2019. The bout was a one-sided TKO stoppage victory for Masvidal.

Jorge Masvidal and Nate Diaz are two of the biggest personalities in the game. That, accompanied by their exciting fighting styles, made their 2019 “BMF” title clash a spectacle that fans just had to see.

Dwayne “The Rock” Johnson even received an entrance that night so you just know it was a big deal.

In the minds of many, the fight was stopped prematurely after two nasty cuts opened around Diaz’s eye. This led to the doctor stopping the action at the end of round three proving once more that the MMA gods work in truly devious ways.

On The MMA Hour with Ariel Helwani, ‘Gamebred’ discussed his rival’s current frustration with the UFC. He noted that while he normally doesn’t side with the UFC, he’s heard that Diaz keeps turning fights down.

“I think he’s got too much CTE to even understand what they’re putting in front of him. Normally I don’t take the UFC’s side as you know, but from what I’ve heard and seen, this guy just has a f**king ego bro. Like just f**king fight. I can send him off in his last fight with all that s*it talk he’s been doing lately. I wouldn’t mind breaking his jaw and sending him off to whatever gambling casino he’s going to be fighting at.”

“I don’t mind, but he won’t sign when my name gets brought up. He goes ghost on Hunter [Campbell], he goes ghost on all the matchmakers for a couple of weeks when my name gets brought up. So, it’s whatever man. And, if he’s hearing this and he’s going to go make a little stupid tweet and go down the whole thing, b*tch sign the paper and let’s fight man.”