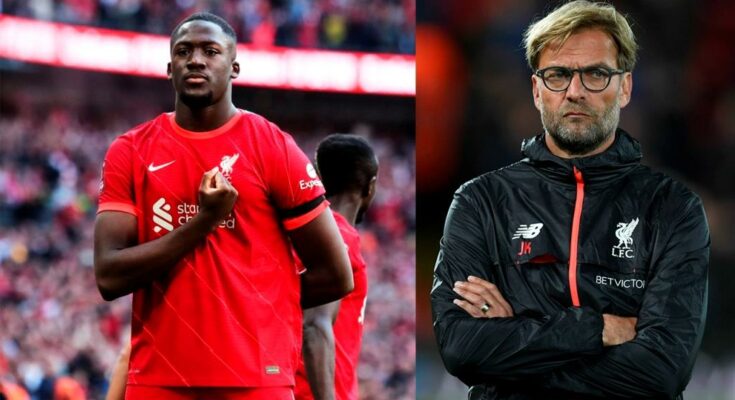 They were the better team from the start, showing more intent and creating better chances, while Manchester City could never click into gear.

Besides a few promising moments, particularly that from Erling Haaland when he skied his effort over the bar from up close, the Premier League holders were well below their best.

Liverpool’s exuberance showed through and through, with new signing Darwin Nunez also making a big impression on his debut with a late goal.

Liverpool manager Jurgen Klopp has offered an injury update on Ibrahima Konate and others ahead of their 2022-23 Premier League opener this weekend.

The Reds lifted the Community Shield trophy on Saturday after beating Manchester City 3-1, their first win in the competition in 16 years.

Now, as their attention turns towards the top-flight campaign, Klopp has a few fitness concerns in the squad, including that of Konate.

The Frenchman was taken off during their 3-0 friendly defeat to Strasbourg on Sunday, just over 24 after their cup win in Leicester.

He limped off early into the second half in discomfort but Klopp wasn’t too concerned about Konate’s condition and hoped nothing was serious.

Speaking to the press after the match, he said (via Liverpool Echo):

“We don’t know exactly yet on Ibou, but it doesn’t look too concerning, so I hope we caught it in the right moment.”

Curtis Jones was conspicuous by his absence from Liverpool’s weekend clash as Klopp revealed that he kept him out after their medical department’s advice.

Revealing that further assessment of his condition will be done on Monday, he added:

“Curtis felt a little bit and we couldn’t take any risks. [There] was no impact or whatever, so that always makes it a bit, ‘My god, what could it be?’ We had no time; he felt it today and he wanted to play desperately, but then the medical department said no and that we needed to make further tests. We will do that tomorrow and then we will know more.”

Naby Keita missed the Manchester City game with illness but is expected to return to the fold for their trip to Craven Cottage in Saturday’s league opener.