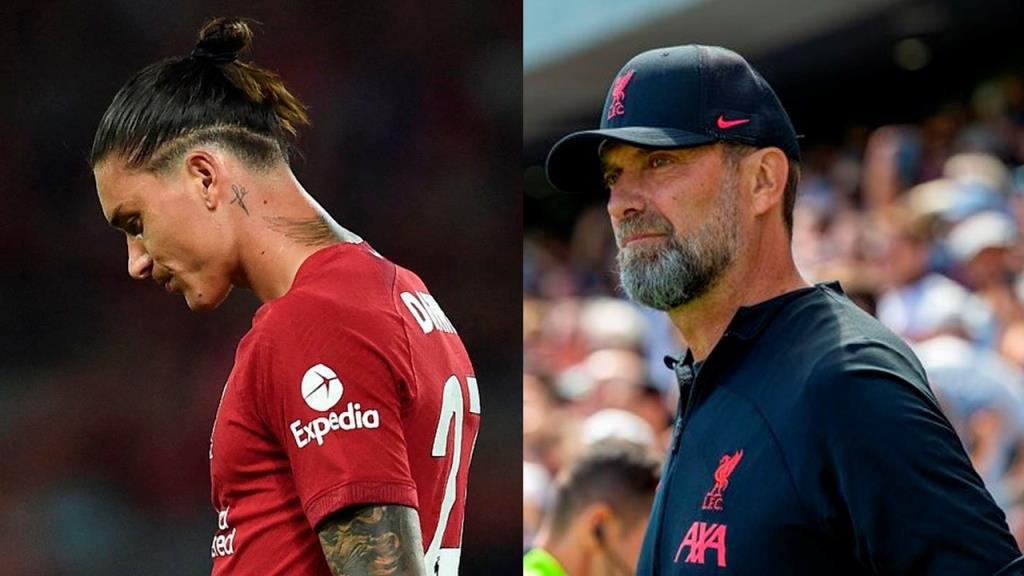 Jurgen Klopp has already made it clear that Fabio Carvalho was primed to play a key role for Liverpool this season – but the Reds chief surely would not have envisaged relying on the former Fulham youngster just three games into the new Premier League campaign.

But Klopp could be forced to do just that in next Monday’s crunch clash with Manchester United now that Darwin Nunez is unavailable. Liverpool’s new £85million striker lasted less than an hour on his Anfield debut, which ended in disgrace after he was dismissed for a blatant headbutt on Crystal Palace defender Joachim Anderson.

Nunez’s moment of madness means Klopp will have to cope without the Uruguayan’s services for the next three matches – a situation that has already been described as a “nightmare” by Jamie Carragher.

“[Klopp] can be frustrated and he’ll speak to the lad. But Darwin Nunez will know more than anyone that he’s made a huge mistake.

“There’s no debate, everyone knows that. No Liverpool supporter can be having a go at Anderson, I know they were booing him in the stadium but that’s just what happens now that’s what supporters do. He’ll speak to him, he mentioned he’ll support him almost like another pre-season.

“He’s not going to be there, I’m not sure how the games fall or if there’s a cup game in between but he’ll try to work with him without games. A lot of the time you can’t train properly because there are so many games but work with him, get him up but it’s a nightmare.

If Roberto Firmino is unable to join Mohamed Salah and Luis Diaz for next week’s trip to Old Trafford, then Carvalho could be accelerated into Klopp’s starting XI after a brief cameo in Monday night’s 1-1 draw with Crystal Palace.

Carvalho starred for Fulham last term as they romped to the Championship title, notching 11 goals and eight assists before his dream £5million switch to Anfield. The talented 19-year-old was deployed in an attacking role at Craven Cottage and could slot straight in alongside Salah and Diaz to form a fluid forward line.

The Portugal U21 star was tipped for big things by Klopp earlier this month – with the Reds chief insisting that the Fulham academy graduate is ready to emerge as an “important player” for Liverpool this year.

But that bold prediction could now be put to the test sooner than expected in the wake of Nunez’s moment of madness.

“Top player. I really love it. He’s a massive talent and a really good kid. I’m really happy to have him, so it’s very important for us because we count on this age group as well. We don’t wait now until they are 22, 23 or whatever and use them.

“No, no, no. He is ready like Harvey is ready in a similar age group. That’s really cool. We all need luck in life as well with injury and stuff like this, but without that he will be a really important player for us.”