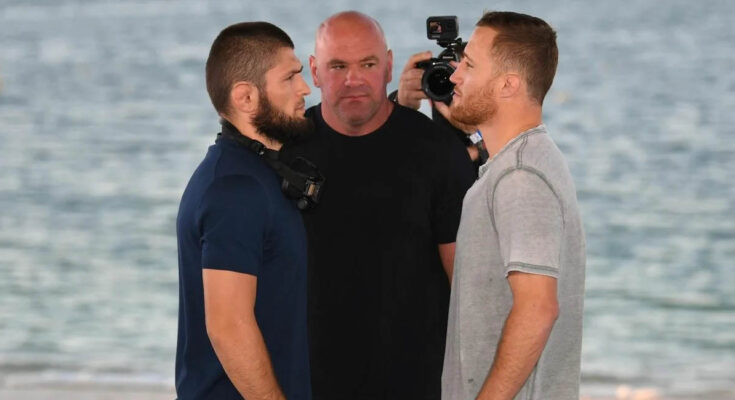 The contender for the UFC lightweight title, Justin Gaethje, considers his former rival Khabib Nurmagomedov a much more dangerous fighter than the current champion Charles Oliveira.

During a recent appearance on the Full Send podcast, ‘The Highlight’ was asked to give his assessment on the legacy of Khabib ‘The Eagle’ Nurmagoemdov.

The Dagestani star Nurmagoemdov retired with an undefeated professional record of 29-0. Gaethje, a former opponent of Nurmagomedov, said that it’s hard to say that the former lightweight champion is the greatest of all time as it’s difficult to compare eras. However, Justin Gaethje feels the Russian is the best of the modern era:

“Ever? You have to break it up to different eras, but certainly in the modern era.”

Nurmagomedov recently got inducted into the UFC Hall of Fame for his career inside the octagon. He displayed unprecedented dominance throughout his time in the UFC.

Gaethje named Anderson Silva, Jon Jones, Chuck Liddell, BJ Penn, and Georges St-Pierre as some of his favorite fighters growing up. The Arizona native was full of praise for Jon Jones’ UFC run during his earlier days. Here’s what ‘The Highlight’ said:

“I love fighting, when Anderson Silva’s run, he did what he did was probably one of the best runs. Jon Jones, when Jon Jones first showed up was absolutely spectacular. He took out all the big names. Georges St-Pierre, Chuck Liddell, BJ Penn, and I am sure I am forgetting a few.”

Justin Gaethje faces Charles Oliveira this weekend at UFC 274. Gaethje is set to challenge for the undisputed UFC lightweight title for the second time in his career at UFC 274. He will take on Charles Oliveira in the main event of the pay-per-view at the Footprint Center in Phoenix, Arizona.

Check out  Justin Gaethje on the Full Send podcast: