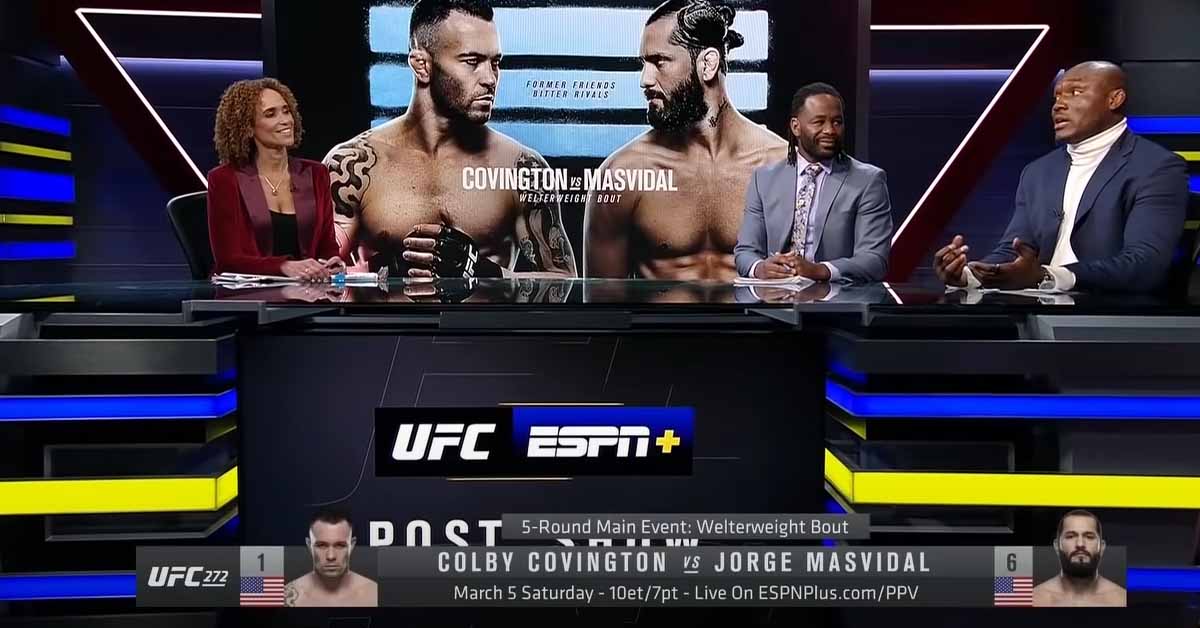 Kamaru Usman has explained why Jorge Masvidal could beat Colby Covington at UFC 272. Usman himself is currently on the back of a second win over Covington, having beaten him at UFC 268.

In the aftermath of UFC Vegas 49, Usman and Rashad Evans looked ahead to the grudge match between Masvidal and Covington on March 5th. ‘The Nigerian Nightmare’ pointed out Masvidal’s height advantage in his stance and also praised his takedown defense.

While speaking on ESPN MMA, Usman also took note of Masvidal’s striking, stating that ‘Gamebred’ is well capable of knocking out his opponents. Usman said:

“I think he could potentially win the fight because one thing about Masvidal is he is one of the only guys who in his stance is so tall in his stance but he is able to defend takedowns from some of the best wrestlers. He’s very very good at striking, so relaxed and so fast and he’s able to touch you. He might not feel as hard but he can touch that button to be able to shut the lights off and I mean, being able to run across the octagon in five seconds, landing knee like that just shows a different level of athleticism.”

‘The Nigerian Nightmare’ praised Jorge Masvidal for his athleticism and billed him as a “skilled striker.” Usman also believes his former opponent has the tools to land the right shot and take the fight away from Covington.

“He’s an athlete, he’s a skilled striker, he’s a skilled fighter, and he definitely has the tools to be able to land that shot to steal this fight away from Covington. So, I’m excited, I can’t wait, I will be there. I haven’t been to a fight in a long time,” added Kamaru Usman.

Kamaru Usman currently holds wins over both Jorge Masvidal and Colby Covington, having beaten both men twice. Usman’s first win over Covington was in 2019, which was also his first title defense.

During the same breakdown on ESPN MMA, Usman added that Covington will realize how hard it is to take Jorge Masvidal down in an actual fight, compared to the regular training sessions they had.

The first bout between ‘The Nigerian Nightmare’ and ‘Chaos’ was an instant classic. The two men took each other to the limit before Usman got the TKO win in the fifth round. The second fight between them was rather more technical but Usman got the job done.

In 2020, Usman got his hand raised against Masvidal in a fight ‘Gamebred’ took on short notice. At UFC 261, the reigning UFC welterweight champion knocked out Masvidal in brutal fashion.