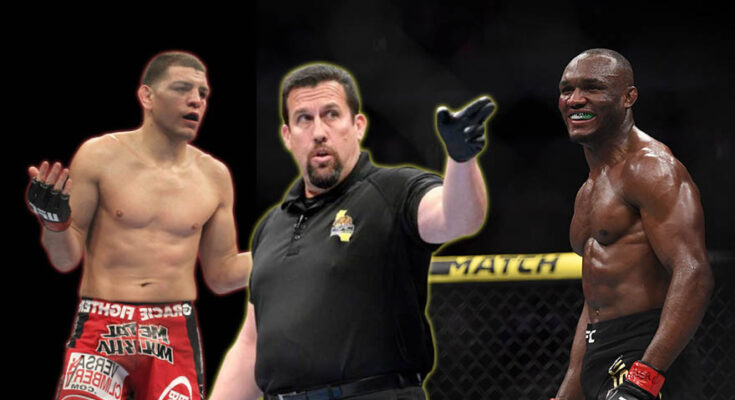 Welterweight champion Kamaru Usman has reacted to John McCarthy’s latest bold claim. The former UFC referee believes Usman would struggle with the stand-up of Nick Diaz and would resort to type, taking his opponent to the ground and wrestling him instead.

Nick Diaz, who hasn’t won a fight in over a decade (literally), wants a shot at Kamaru Usman. Diaz thinks he can beat “The Nigerian Nightmare.”

Confidence can serve a fighter well, but this is past the point of confidence. Nothing in Diaz’s fight against Robbie Lawler suggested he’d even go the distance with Usman.

Nick Diaz expressed his desire for a title shot while speaking to TMZ last week.

“We’re working on end of the year,” Diaz stated in regards to a timeframe for his return. “I’m just focused on my training right now. If I’m going to fight, I want to fight for the title.”

He’d add that he prefers to just “Just skip all the mess. I don’t need to go in there and get my ass whooped by one of the young guys, anyway— and it’s not that I won’t win. It’s just not motivating to fight somebody that’s— I want to fight for the title. I’m 38 years old.”

As for Usman, “I think I’ll beat him,” said Nick Diaz.

The comments from ‘Big’ John McCarthy come after Nick Diaz revealed in an interview with TMZ Sports that he’d be interested in fighting ‘The Nigerian Nightmare’ for the welterweight title. The 38-year-old hasn’t fought since 2021 when he retired in the third round against Robbie Lawler. Diaz’s fight last year in September ended a six-year hiatus from the octagon.

The former referee said on the WEIGHING IN podcast:

“If there’s one thing that you’d know about Nick, he’s gonna come and give you everything that he’s got. Would I mind seeing him against Kamaru? No, I wouldn’t, other than this – Kamaru would stand with him until he started getting lit up. And then he’s gonna go and use his wrestling, which he should, not saying he shouldn’t, but what is Nick always complaining about? People wrestling and it’s always on the ground.”

Kamaru Usman has responded to John McCarthy’s statement on Instagram.

This isn’t the first time Kamaru Usman’s stand-up skills have been questioned. Before the 35-year-old’s first fight with Colby Covington, it was expected Usman would try and dominate the grappling and wrestling due to Covington’s pressure in the stand-up. Instead, the two men fought on their feet for almost the entire fight.

Usman has even won three of his last five bouts via TKO or KO. Finishes over Colby Covington, Gilbert Burns and a vicious KO of Jorge Masvidal highlighted the improvement in the stand-up game by the Nigerian-American.