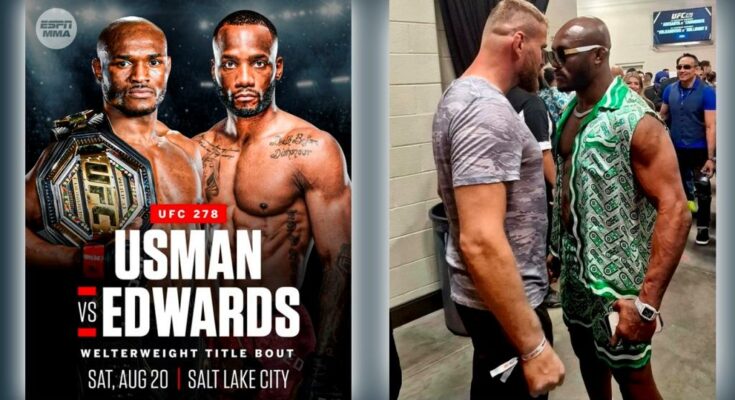 UFC welterweight champion, Nigerian Kamaru Usman talked about his intention to move up two weight classes at once to prove that he is the best pound-for-pound fighter.

‘The Nigerian Nightmare’ is set to face Leon Edwards in the main event of UFC 278 next month. The bout is a rematch of their December 2015 encounter. That bout wound up being won by Usman via unanimous decision.

Nearly seven years later, the two welterweights are set to run it back. However, the stakes are much different than the first time around. While they first met as prospects in 2015, they meet as the champion and the challenger at UFC 278.

Furthermore, Kamaru Usman isn’t just the welterweight champion, he’s one of the biggest stars in the entire sport. Now, he seems ready to take another step in his stardom. The 35-year-old is ready to move up in weight, and challenge himself. However, he’s not looking to move up to middleweight.

In an interview with TMZ Sports, the UFC welterweight champion confirmed that he’s going to move up in weight. However, he doesn’t want to move up just one weight class, but two. Kamaru Usman name-dropped UFC light-heavyweight champion Jiri Prochazka, and contender Jan Blachowicz as possible opponents.

“We’re gonna go in there and we’re completely focused on Leon Edwards,” Usman said. “But after Leon Edwards, we have our sights set on [lght-heavyweight], whether it’s Jan or whether it’s Jiří, whoever it is, that’s what we want.

Kamaru Usman may well need to add the name of Glover Teixeira to that equation.

While it initially appeared that Procházka was targeting an all-European affair with Blachowicz for his first defense, the Czech champ recently released a video announcing his decision and, to the surprise of many, he’s opted to favor an immediate rematch with Teixeira.