Kamaru Usman reacts to Conor McGregor wanting to fight him 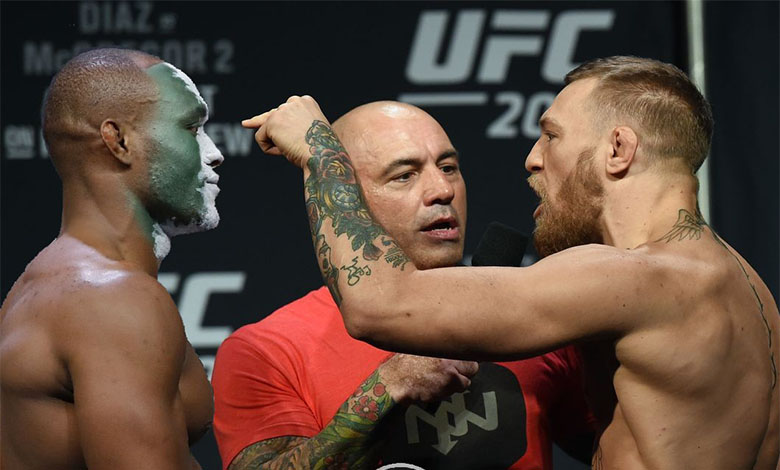 Kamaru Usman has reacted to Conor McGregor’s proclamation that he will fight him next. It’s safe to say the UFC welterweight champion isn’t taking the challenge too seriously.

Conor McGregor has been out of the cage since UFC 264 in July 2021. ‘The Notorious’ lost his trilogy fight with Dustin Poirer via TKO after suffering a broken leg. Due to the injury, the former dual-weight champion has been on the shelf.

However, in recent days, he’s started to get more vocal on a return. First posting training footage to social media that showed him boxing, he’s now said his ideal return opponent. ‘The Notorious’ seemingly has an eye on UFC welterweight champion Kamaru Usman.

McGregor discussed his return in an interview with The Mac Life. The former champion said that he wants to face Kamaru Usman to become a three-weight world champion. The accomplishment has yet to be reached by any fighter in UFC history.

“I believe myself vs. Usman for the 170-pound title for my comeback fight is the one I’m eyeballing at the minute,” McGregor said.

“I’ve gotten myself down to a lightweight frame, but I’m big now. I feel big, I feel strong, I feel healthy, I’ve got good energy. Coming back after a gruesome injury, I do not want to deplete myself. There’s no need to deplete myself. And I feel confident against Usman – a jab-happy, sloppy orthodox wrestler with no submissions whatsoever. What’s he gonna do? Where’s the danger here? I don’t see a danger with him.”

Kamaru Usman has now taken to social media to respond to McGregor’s comments. It’s safe to say that the UFC welterweight champion doesn’t take ‘The Notorious’ that seriously.

The champion first posted a tweet asking fans if they wanted to see a murder. While the first post was a hint at the McGregor matchup without mentioning it, his follow-up tweet left no question what he was referring to.

‘The Nigerian Nightmare’ then posted a picture of him laughing alongside Khabib Nurmagomedov.