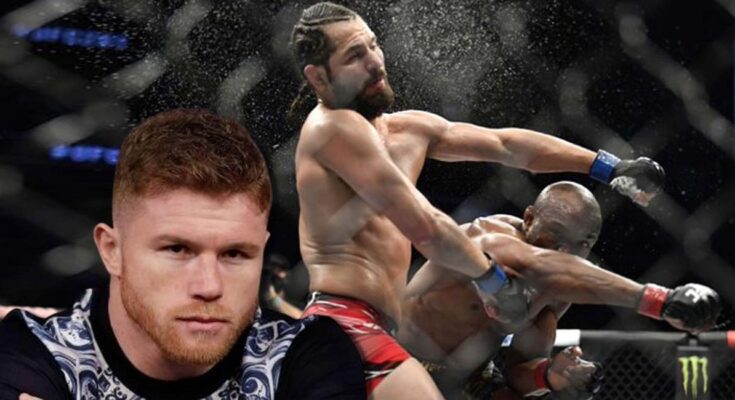 Nigerian UFC welterweight champion and pound-for-pound No. 1, Kamaru Usman said that his knockout victory over Jorge Masvidal proved that he can beat Canelo Alvarez.

Since last year, pound-for-pound No. 1 Kamaru Usman has repeatedly challenged Alvarez to a bout. Alvarez says he’s presently focused on establishing his boxing legacy, but he hasn’t ruled out a future fight with ‘The Nigerian Nightmare.’

Kamaru Usman is scheduled to defend his welterweight belt later this year but has proposed fighting Alvarez on Cinco de Mayo weekend in September.

The UFC star cited his knockout of the year candidate against Masvidal in April as evidence that he could compete with the Mexican.

‘The Nigerian Nightmare’, as he is affectionately nicknamed, floored Masvidal in the second round and left him seeing stars. Usman’s shot was so devastating that his opponent’s corner had to explain to their man what had just transpired.

Kamaru Usman may fight out of Florida but it was the local man Masvidal who had the backing of the Jacksonville crowd. That being said, there was a certain level of respect and admiration for the victor and the outrageous way in which he cut the fight short.

“After I went out there and dealt with Gilbert Burns, I got him back and said, ‘Masvidal, you’re next. I’ll give you another shot, I’ll give you a full camp and I’m knocking your head to the moon this time.’

Everyone said, ‘Masvidal’s the best boxer in MMA.’ I sent him to the shadow realm. I think he’s still up there.”

“Then you’ve got the pound-for-pound fighter on the planet around the same weight class that can actually do it and both be in their prime? You’ve never had that. “I’m brave enough to say, I’m coming in there and I’m going to come in there and give you hell as long as I’m able to do this,'” the Nigerian concluded.