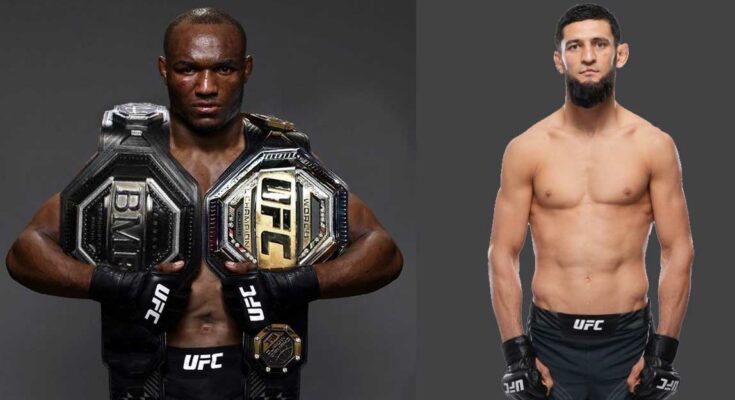 UFC welterweight champion Kamaru Usman has addressed Khamzat Chimaev’s threat to his crown but remains confident that nobody can stop his dominance at 170lbs.

Chimaev recently battled through his toughest fight in the elite MMA promotion at UFC 273 by scraping a close unanimous decision win against a former title challenger to Usman in Gilbert Burns.

Chimaev and Burns’ brawl was immediately dubbed an instant classic and won ‘Fight of the Night’ bonuses for both men while many deem it to have been the best octagon clash of 2022 thus far.

Less than a week later, Usman has been probed on whether he has any uncertainty he could beat Chimaev, who has often called him out, after viewing the Burns fight.

“I’ve never had a doubt that I can and will or would beat anyone in the world,” Usman boldly responded to TMZ, before responding that he had “absolutely” seen weaknesses in Chimaev’s game during the barnburner in which Burns managed to drop him and put together troubling combinations.

“That’s what I’m supposed to do. That’s my job. That’s just how I roll, what I do. I dissect each and every situation all the time, and I definitely did in that fight. But, there were a lot of things there that I knew were present all along,” Usman claimed.

That being said, Usman paid Chimaev his dues for an impressive, meteoric rise up the welterweight rankings where his latest win saw him elevated from number 11 to three.

“This kid has done a good job going out there and defeating the number two guy in the division,” Usman noted.

“I’m just focused on the next one, and if it’s Edwards, so be it, I’ll be prepared, I’ll be ready to go in there and do what I do best,” the champion of over three years continued, with contracts for the potential fight with Edwards still not penned.

If Burns has anything to do with it, however, Sweden-based Chechen Chimaev will have to run it back with him first before entertaining ideas of a maiden pay-per-view headline showdown with Usman.

Burns claims that he initially demanded a five-round meeting from UFC top brass, which is usually only reserved for title bouts and top-billed Fight Night encounters, and therefore insists on 25 minutes with Chimaev in a rematch where he believes he could get the job done this time.

“I don’t know if because of the two title fights maybe, I don’t know. I didn’t get an answer. The way I see it, we’ve got to do it again. It’s got to be five rounds next.”

“A lot of respect to Khamzat,” Burns went on. “Once again, I don’t want to take nothing away from this guy. I have no excuse. I went into a battle. I leave my heart in there.

“The guy hurt me a couple of times, [but] I kept moving forward. I keep trying to fight. I like him. Every time we go to these fights, we leave a piece of ourselves in there but I knew that going into this fight, this guy would be very, very tough.

“Not the monster – no way that guy would have an easy fight and finish me in the first round – but he ended up getting the win so I have to give a lot of respect to this guy,” Burns conceded.