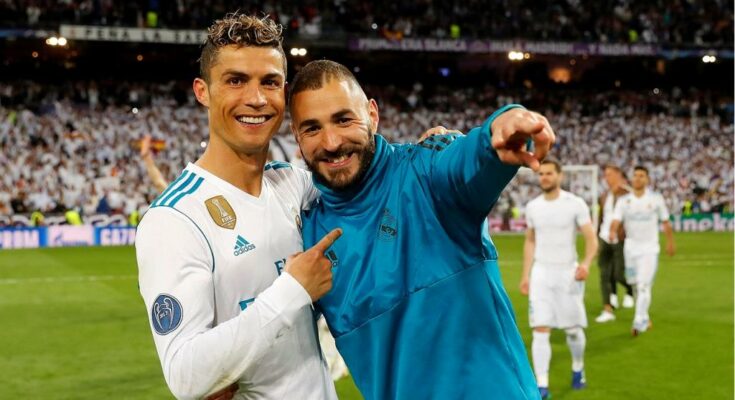 Real Madrid ace Karim Benzema does not want Manchester United star Cristiano Ronaldo to be re-signed by the La Liga champions this summer, as per El Nacional.

Ronaldo’s future is of interest following reports that he has asked United to allow him to leave if a suitable offer is made this summer.

It has led to speculation that he may be in line for a stunning return to Real Madrid, a club of which he has enjoyed huge success.

Ronaldo, 37, managed a remarkable 446 goals in 436 appearances for Madrid during nine trophy-laden seasons at the Santiago Bernabeu.

The Portuguese star won four UEFA Champions League titles, having arrived from United back in 2009 in a then-world record £80 million (€94 million) move.

The legendary forward impressed for United last season upon his groundbreaking return to Old Trafford from Juventus. He scored 24 goals in 38 appearances.

However, the Red Devils slumped to a sixth-placed finish in the league.

It means Ronaldo will not play Champions League football, something unconceivable for the five-time Ballon d’Or winner.

Despite this, a return to Real Madrid doesn’t seem to be in the offing for the former Galatico as his ex-teammate Benzema is reportedly against the proposed move.

Madrid had already told Ronaldo they did not want to re-sign him weeks ago, but president Florentino Perez has been reconsidering the notion.

A lack of goals scored in the absence of Benzema, who bagged 27 of Madrid’s 80 in La Liga last season, is proving problematic.

The likes of Mariano Diaz, Eden Hazard, Borja Mayoral and Luka Jovic have all failed to be convincing replacements in the Frenchman’s absence.

Benzema doesn’t want Ronaldo to return as he feels he will lose his importance once again to the legendary striker.

During the Portuguese captain’s time at the Bernabeu, Benzema had to play second-fiddle throughout the spell.

Since Cristiano Ronaldo departed Real Madrid for Juventus back in 2018, Karim Benzema has become Los Blancos’ talisman and has excelled in the role.

It’s fully understandable that the French star would have reservations over Ronaldo rejoining given he has become the center of Madrid’s recent success.

Last season was perhaps the greatest campaign of Benzema’s career as he dominated La Liga and the Champions League.

He was instrumental in his side’s Champions League and La Liga double, scoring an astounding 44 goals in 46 appearances.

The former Olympique Lyonnais striker’s two hat-tricks in the knockout stages of the Champions League against Chelsea and Paris Saint-Germain are iconic.

The Frenchman clearly doesn’t want to risk not having the chance to carve out more memorable moments at Madrid, with Cristiano Ronaldo potentially stealing the spotlight.