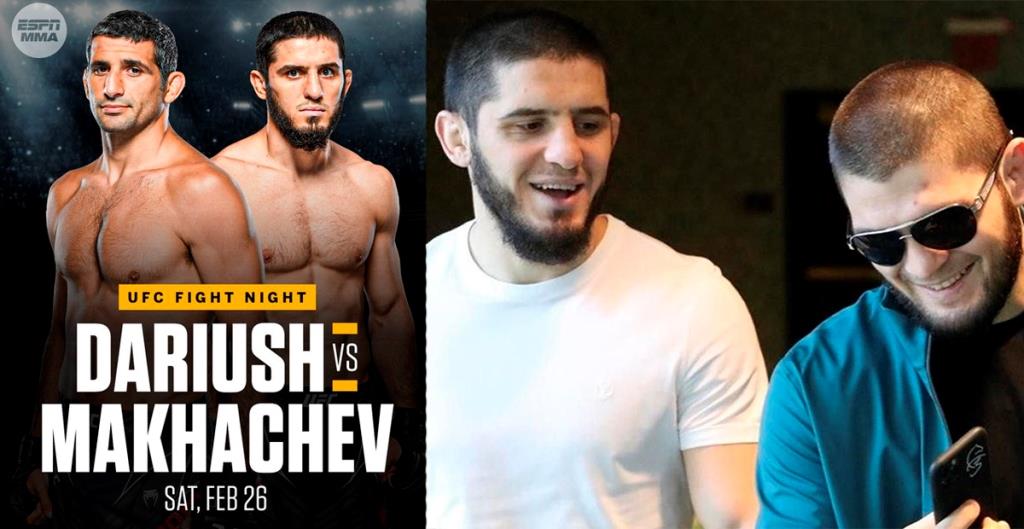 ‘The Eagle’ believes Makhachev has everything in place with almost a month to go until the bout. Posting pictures with the top-five lightweight contender on Instagram, Khabib wrote:

‘It was good sparring day, and I am very glad to see how @islam_makhachev is ready. 26 days before the fight. Everything on point.”

Widely regarded as Khabib’s prodigy, Makhachev is currently riding a magnificent nine-fight win streak. In his most recent outing, he delivered a first-round submission win against Dan Hooker at UFC 267.

Meanwhile, Beneil Dariush has racked up a seven-fight win streak of his own. Dariush hasn’t fought since May last year when he dominantly outgrappled Tony Ferguson over three rounds at UFC 262.

Beneil Dariush hopes to bring the pressure to Islam Makhachev

While many fighters have been accused of ducking Islam Makhachev, Beneil Dariush does not belong in that bracket. A Brazilian jiu-jitsu black-belt himself, the Iranian-American seems unperturbed by Makhachev’s dominant grappling displays.

According to Dariush, Makhachev has looked flawless because his previous opponents have been unable to apply adequate pressure on the former Combat Sambo champion. Dariush believes his well rounded skillset will allow him to put Makhachev on the backfoot.

“I haven’t seen anyone really pressure him and it could be because they couldn’t. They weren’t well-rounded enough. If you try pressuring him standing, he takes you down. If you try to apply some jiu-jitsu, his wrestling is so good he doesn’t allow you. From what I’ve seen, they haven’t been able to put pressure on him because they don’t have enough skills, the well-roundedness required to do that and I think I’m the guy to do that.”

Dariush also believes that the winner of his bout against Makhachev should soon be up for a title shot. However, he has his concerns regarding Conor McGregor, who he believes might get a title shot despite back-to-back losses against Dustin Poirier.