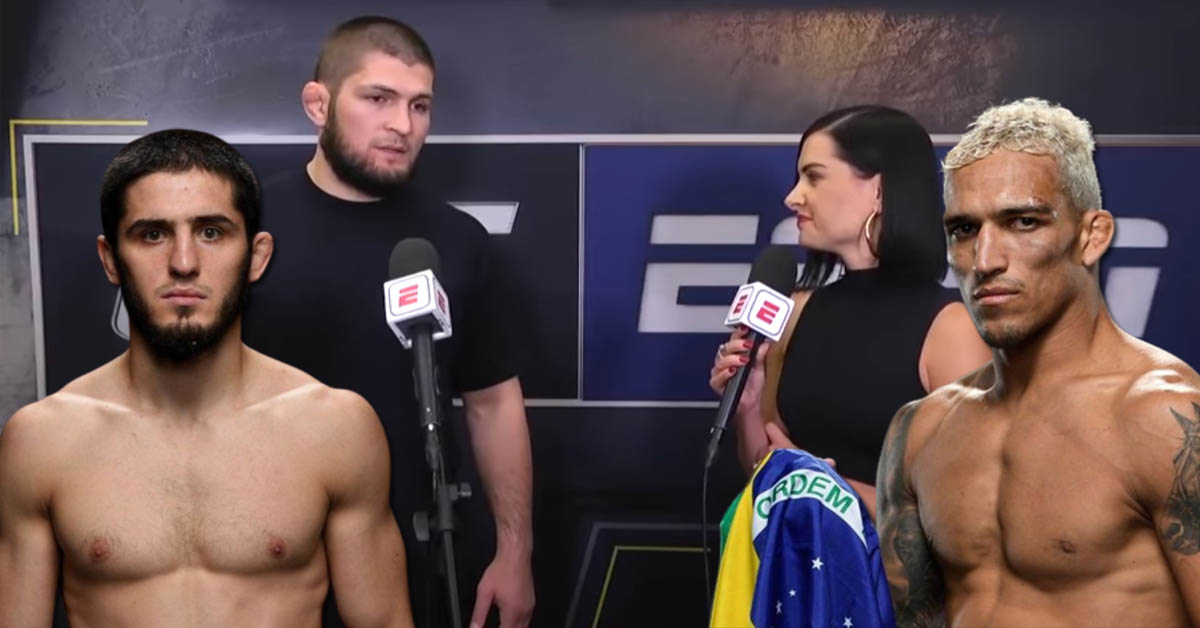 Khabib Nurmagomedov was impressed with the poise and execution of Islam Makhachev at UFC Fight Night 202.

Even after a late opponent change from Beneil Dariush to Bobby Green in Saturday’s main event at the UFC Apex in Las Vegas, Makhachev (22-1 MMA, 11-1 UFC) remained focused on the task at hand and left the octagon with a lopsided first-round TKO, extending his winning streak to 10 consecutive fights.

Makhachev could’ve easily been shaken when he went from highly ranked lightweight contender Dariush to unranked fan favorite Green on just 10 days’ notice, but he did not complain and instead delivered another dominant performance.

The way in which Makhachev handled the whole thing was quite impressive from the perspective of his coach and mentor Nurmagomedov.

“It doesn’t matter who his opponent is. The goal is going to stay the same. Same goal, different opponent. Of course we feel a little bit bad he don’t fight Beneil. He have big injury and end of this year, he’s going to come back. If he wins one fight, he’s going to be next in the line.”

Although Nurmagomedov appreciated Green’s willingness to step up and fight Makhachev on such short notice, he said he was confident the fight would unfold as it did. He knew the skill gap was too much, and especially under the circumstances.

“I don’t want to disrespect Bobby Green,” Nurmagomedov said. “I watched a lot of his fights. But there is levels always. I always tell people: There is fighters, there is champions, there is elite. I think Bobby Green is like a fighter. Islam is elite. This is what I think and what I feel when I train with him for a long time.”

Makhachev’s win over Green may have set the table for his first UFC championship fight. Nurmagomedov held the UFC lightweight belt for some time, but since retiring, he’s been pushing for Makhachev to be the one to take over at 155 pounds.

Khabib Nurmagomedov’s former title currently is in the possession of Charles Oliveira, who puts it on the line against Justin Gaethje at UFC 274 on May 7. All signs point to Makhachev getting the winner of that fight, and his goal appears to be for it to happen at the UFC’s annual event in Abu Dhabi, which is likely to take place this fall.

Khabib Nurmagomedov sees that as the timeline for his pupil to challenge for gold, as well. He’s not 100 percent certain who would enter that bout as potential champion, but admitted Oliveira vs. Makhachev would be the bigger fight.

“Dana (White) says they are going to make very big show in Abu Dhabi later this year, and I think this place is where Islam is going to compete and fight for the title,” Nurmagomedov said. “If I say I think Justin Gaethje is going to win, maybe people are going to think because I fight with him, that’s why I want him to win – something like this. For UFC, it’s going to be better if Charles Oliveira wins – 11-win streak vs. 10-win streak. Two new blood for lightweight division.

Islam Makhachev gives his prediction for Charles Oliveira vs. Justin Gaethje which is expected to take place at UFC 274.