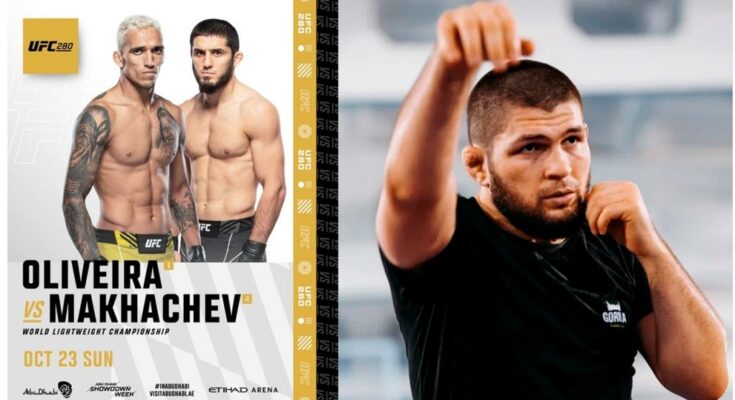 First of all, “Eagle” commented on Oliveira’s dissatisfaction with the venue of the tournament, which will be held on October 22 in Abu Dhabi (UAE).

The former UFC lightweight champion noted that neither Oliveira nor Makhachev have any agency in deciding the venue and that power rests solely with the UFC. According to Khabib Nurmagomedov, Makhachev would have no qualms of fighting Oliveira in Brazil if that was what the UFC had wanted. ‘The Eagle’ recently said in an interview with Mike Finch:

“Who cares what he want, you know?! And he [Oliveira] cannot make decision, Islam cannot make decision… We don’t choose location. UFC send us location, we fly. Doesn’t matter. They tell us, ‘Okay, go to Brazil’, we gonna go Brazil, no problem. But Abu Dhabi, it’s like, it’s our territory brother. I think he understand this and he try to little bit, like, avoid, you know?! But now, it is what it is.”

At the end Khabib Nurmagomedov pointed out the scale of this confrontation, citing the example of his never held mega-fight against Tony Ferguson:

“We’re about 90 days away from the fight. And as an MMA fan, I would like to say that this is the most anticipated fight of the year. A fighter with an eleven-fight winning streak against a fighter with a ten-fight winning streak. The way I see it, there hasn’t been a fight in the UFC yet with such insane win streaks. Eleven wins against twelve wins was supposed to happen in my fight with Ferguson, but it never happened. Now it’s Islam versus Charles. A real dream fight.”

After rallying hard for a bout against Conor McGregor, Charles Oliveira eventually relented, agreeing to fight Makhachev in Brazil. Justifying Oliveira’s demands, his coach Diego Lima hinted that the judges’ decision could possibly be biased in Abu Dhabi. However, ‘do Bronx’ now seems set on a collision course with Makhachev at Fight Island, Abu Dhabi, in October.