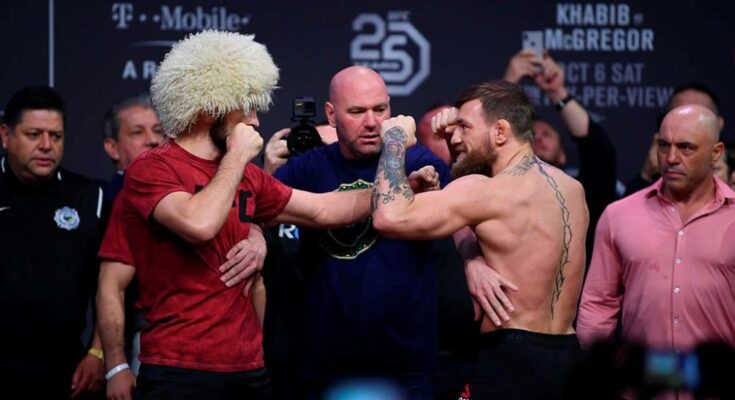 Khabib Nurmagomedov is of the opinion that fighting Conor McGregor for the UFC lightweight title is the highlight of his illustrious career.

The undefeated former champion was recently inducted into the UFC Hall of Fame modern wing. Now that it’s all said and done for his competitive career, Nurmagomedov looked back to share what he believed was his shining moment.

Speaking to reporters during a media scrum, ‘The Eagle’ was asked to select one moment in particular that stood out to him. The Dagestani responded by saying:

“It was here, this arena. October 6, 2018 – biggest fight in MMA history. I’m very happy I won this fight. I could lose any of my fights, but no way this fight.”

Nurmagomedov fought Conor McGregor on October 6th, 2018 at UFC 229. The fight between the two had immense hype around it and had garnered interest from people around the world.

Nurmagomedov, of course, was referring to his UFC 229 title fight against McGregor. After several months of build-up, the intense rivalry between the two finally culminated in a memorable fight for the ages.

‘The Eagle’ took care of business that night, forcing the Irishman to tap out in round four to retain the lightweight belt. The infamous post-fight brawl between Nurmagomedov’s cornermen and McGregor’s teammates certainly brought a lot more attention to the event, for better or for worse.

As far as Khabib Nurmagomedov is concerned, his fight with Conor McGregor is the “biggest fight” in MMA history. Appearing as a guest on the Full Send podcast, ‘The Eagle’ said:

“Yes, this is for sure the biggest fight in the history of martial arts. Nothing close I think, even when he fought with Mayweather it was like okay but not many people cared about that fight. It was a historical event, you know, but inside the fight many people don’t even remember what happened inside the fight.”

Based on the numbers, Nurmagomedov is spot on. UFC 229 is still the highest-selling pay-per-view in the promotion’s history with 2.4 million buys.

Dana White revealed that he attempted to book a rematch between Nurmagomedov and McGregor. However, the UFC president had no luck convincing the Russian, who insisted he was staying retired.