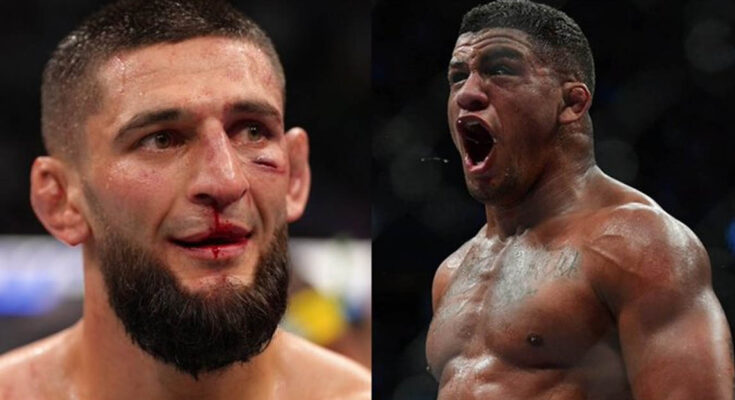 Khamzat Chimaev finally faced a stiff test in the UFC when he fought No. 2 ranked welterweight Gilbert Burns on the UFC 273 undercard. Chimaev and Burns went to war for three hard rounds, with Chimaev having his hand raised in the end. The fight was close, though. Much closer than it needed to be, according to Chimaev’s coach.

In a new interview with Smesh Bros as Chimaev arrived in Chechnya, he discussed the Burns fight and improvements he planned to make in the future. He said:

“I need to keep working now, I’ve made many mistakes, I can do better. I was chasing a knockout the whole fight and missed many shots as a result. But I’m satisfied overall. I love my job! My coach said that I showed only 30% of what I’ve got. Obviously he wasn’t satisfied at all.”

“And I know what I’m capable of. This fight got the main event type of hype and I was excited and wanted to KO him. And that was my mistake from the start. I should’ve worked cleaner. But I will learn from it. It’s a great lesson for me.”

The win over Gilbert Burns puts Khamzat Chimaev at 11-0 overall and 5-0 in the UFC. According to UFC president Dana White, Khamzat Chimaev and Colby Covington will fight in the main event of a network show on ABC sometime in the summer. That will require Covington agreeing to the fight first, though.

Watch the full Smesh Bros interview with Khamzat Chimaev below: