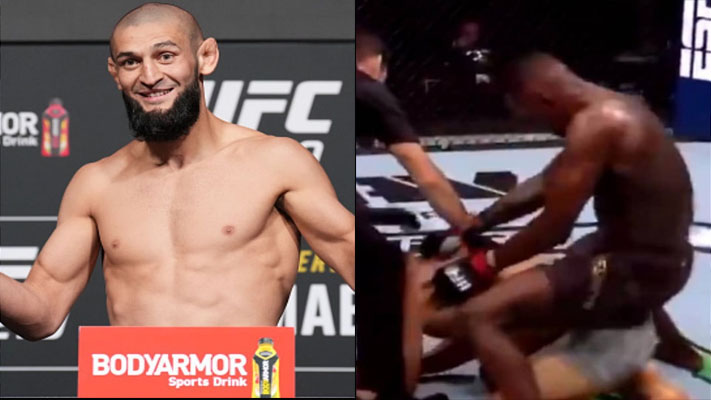 Khamzat Chimaev‘s ongoing feud with Paulo Costa shows no signs of dying down, and the undefeated star has once again ignited problems between the two by sharing Israel Adesanya’s infamous moment in his fight against the Brazilian.

‘Borrachina’ has been publicly sharing his feelings about everything for some time now, making him a popular presence among the online MMA community.

Most recently, the South American stated that he is unhappy with his UFC contract and has no intention of re-signing with the promotion once his deal ends.

In a post on social media, Khamzat Chimaev hit out at Paulo Costa by sharing a picture of the events that took place shortly after the middleweight’s loss against Israel Adesanya two years ago:

“After this moment you became black belt in bjj”

‘The Last Stylebender’ isn’t known for his grappling prowess inside the octagon, but Chimaev has insisted that the former 185lbs champion’s crowning moment in jiu-jitsu came when he ‘mounted’ Costa following his win at UFC 253.

‘Borz’ and Paulo Costa have been embroiled in a less-than-friendly exchange ever since the two had a heated confrontation ahead of UFC 279 earlier this year. Since the backstage scuffle, the Brazil native has been constantly trying to get under the Swede’s skin with a barrage of social media posts.

As for Chimaev, he wants a title fight. However, he may have to win one more matchup as Dana White has claimed that he and the UFC matchmaking team are working on booking the prospect against Colby Covington.

Has Israel Adesanya’s middleweight dominance come to an end?

For a long time, Israel Adesanya looked unstoppable in the 185lbs division and was on track to become one of the greatest fighters to ever compete in the octagon. So, did his latest loss in the cage end dominance?

Despite succumbing to the deadly power of Alex Pereira at UFC 281, the Nigerian-born fighter is still considered by most to be the best middleweight of his generation.

Israel Adesanya is likely to be given a shot to reclaim his crown, and considering how the first fight between the two in the octagon went, it will be difficult to bet against the challenger.

While he has, of course, suffered a setback in his legacy after his loss earlier this month, the 33-year-old now has the chance to gain revenge on his three previous combat sports losses to the knockout artist and recapture his UFC title.