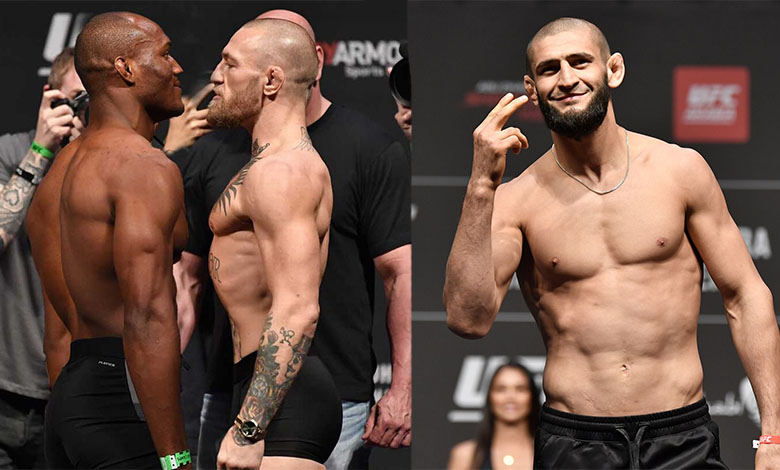 Khamzat Chimaev has seemingly accepted that Conor McGregor could potentially get a welterweight title shot ahead of him. Nevertheless, ‘Borz’ welcomed McGregor to his gym ahead of the Irishman’s imminent return to the octagon.

In light of McGregor’s recent callout to welterweight champion Kamaru Usman, Chimaev opined that the UFC would be interested in the matchup considering the money involved. He also believes he should ideally be getting a title shot if he can dispatch Gilbert Burns in their upcoming clash at UFC 273. In a video posted to his YouTube channel, the 27-year-old said:

“If he [McGregor] wanna be back, if he need some help then, we’re here. If he wanna fight Usman, I think it maybe can happen because the guy is so famous. They can make money, good money, both. That’s why if they wanna fight, both, I think the UFC wanna make it.”

“When I finish Gilbert Burns, I think I am the next for title. But this is the business. Whose the famous, makes more money, they choose them. I understand that. But we’ll see what’s gonna happen. If he wanna come and train with us, he [is] welcome.”

Khamzat Chimaev recently welcomed UFC middleweight Darren Till to the Allstar Training Center in Stockholm, Sweden, where he trains. The duo have been working together for the past few weeks as Chimaev gears up for his bout against Gilbert Burns.

In a recent tweet, ‘Borz’ also invited Conor McGregor to join himself and Till.

Watch Khamzat Chimaev weigh in on the welterweight title picture below:

Conor McGregor has been out of action since breaking his leg at UFC 264 in July last year. ‘The Notorious’ now wants a shot at Kamaru Usman’s 170lbs title on his return to the octagon, eyeing triple champ status.

McGregor doesn’t see a threat in Usman, who he believes has limited skills. The former two-division champion recently told TheMacLife:

“I believe that’s the fight to make, I believe myself and Usman for the 170lbs title for my comeback fight is the one I’m eyeballing. I’ve already won the 155lbs title, I got myself down to a lightweight frame. But I’m big now, I feel big, I feel strong, I feel healthy. I’ve got good energy, I’m coming back after a gruesome injury, I don’t want to deplete myself. I feel confident against Usman, a jab happy, slumpy orthodox wrestler with no submissions whatsoever.”

Meanwhile, Usman has been rallying for a crossover boxing match against Canelo Alvarez. While he would undoubtedly accept a lucrative opportunity to take on McGregor, ‘The Nigerian Nightmare’ seemingly ridiculed the Irishman’s callout in a series of tweets:

Usman is reportedly set to defend his title against Leon Edwards later this year. If he retains his belt, he has a number of options ahead of him. It remains to be seen how things will play out atop the welterweight division.