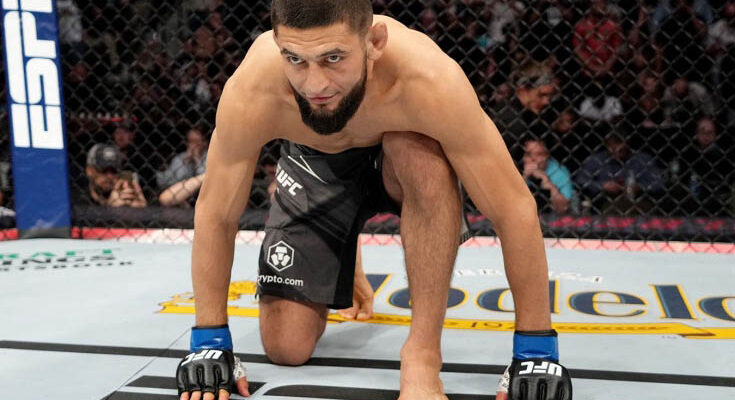 It’s been exactly three months since Khamzat Chimaev’s fight against Gilbert Burns, but since then there’s been no specifics about Borz’s next opponent.

At UFC 273, Khamzat showed that he’s just as human as anyone else, not capable of sizzling his opponent with lasers out of his eyes, as Sean Brady joked. The fight with the Brazilian revealed a different side of Chimaev. He didn’t get any worse as a fighter, but his stock among the fans certainly came crashing down, because their expectations of the Chechen really were too high.

Other fighters of the welterweight division are no longer afraid of Khamzat. Top-15 rookie Michel Pereira has challenged him, Gilbert Burns is demanding a rematch, and Shavkat Rakhmonov is convinced he is stronger than Borz in every aspect. But at the moment these opponents are too small for Chimaev, and Dana White is in no hurry to bring together the Chechen Swede.

For three months there have been rumors of possible confrontations between Khamzat Chimaev and Nate Diaz, Belal Muhammad, Colby Covington and even Leon Edwards, who appeared to be out because of Kamaru Usman’s injury. But while neither fight is officially confirmed, Edwards has become a legitimate title contender, and Muhammad will fight another undefeated prospect, Sean Brady.

After the announcement of the fight between Belal and Brady, the Palestinian mocked Chimaev on Twitter. Muhammad reposted a month-old tweet where Khamzat made two bold announcements. Khamzat Chimaev promised that in August he would fight Diaz, and in October – just with Muhammad. Belal accompanied the retweet with a laughing emoji.

Dana White admitted that he didn’t know who to pair Chimaev with. The UFC boss also criticized Khamzat and claimed that Borz was fed up.

“Khamzat’s case is another confirmation that … That’s who was hungrier than Khamzat? He wanted to fight every weekend, wanted a belt at 84 pounds, at 93, at 77, three fights in ten days… And now that you start making money, all that ardor dies down. I don’t know, we’ll see. I don’t have anything on Khamzat yet,” White said at the beginning of the summer.

Dana is probably trying to put some pressure on Chimaev to lower his contract demands for his next fight. White always said that the ideal fight for Chimaev would be Colby Covington.

But will the president of the promotion want to organize such a high-profile fight if Khamzat Chimaev continues to pad his price?

Long negotiations will not lead to anything good – in the end Khamzat will either get a rematch with Burns, or will have to fight Leon Edwards in case of the British defeat to Usman. Neither fight will bring Chimaev any closer to the title – the Chechen Swede should be more accommodating to White and find a way to regain the burning eyes he had at the start of his UFC career.