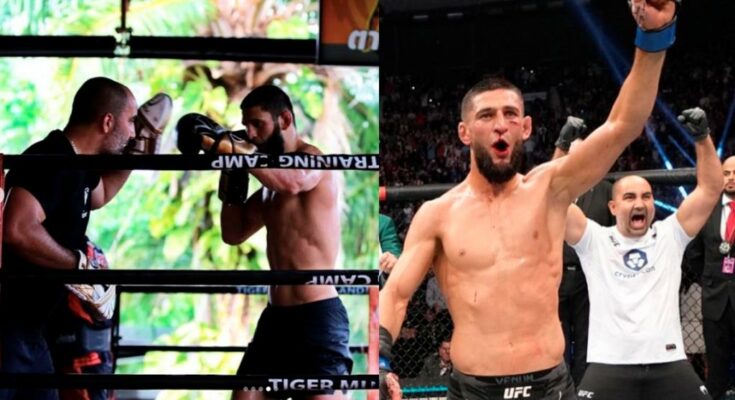 Chimaev’s most recent fight was a unanimous decision victory over Gilbert Burns in an instant classic at UFC 273 on April 9th. Given how close the fight was, many have called for a rematch between ‘Borz’ and ‘Durinho’.

Regardless, Andreas Michael seemingly has other plans for the undefeated Chimaev. When asked who he’d like to see the Russian-born Swede fight next, Michael stated:

“I think [Colby] Covington and then [Kamaru] Usman. We fight the best. Why, it’s a positive like, it’s a positive result. So, we just keep stepping forward. Why fight again against Gilbert [Burns]? I don’t understand this. We’re not after to show who’s the toughest. That’s insanity. Maybe when he [Chimaev] wins the belt, we can take the rematch. Absolutely! But right now, the goal is to become a champion.”

In a recent edition of The MMA Hour with Ariel Helwani, former UFC fighter Brian Stann discussed the meteoric rise of the 27-year-old Chimaev in the UFC. Stann lauded ‘Borz’ for his valiant showing against Burns and approved of him fighting Colby Covington.

Stann insinuated that a potential Covington matchup would make sense for Chimaev. However, he added that it’d be no easy task to get past ‘Chaos.’ Furthermore, he specifically warned ‘Borz’ not to rush into a showdown with Kamaru Usman.

“I think at this point, it would make sense, if I’m managing him – Hey, don’t be in such a rush because the reward is Kamaru Usman. And if you wanna try and beat that monster, you’ve gotta hope that he’s getting real comfortable, and making a lot of money, and wearing all the name brands, and not training as hard. Because, athletically and mentally right now, Kamaru Usman could be the best fighter on the planet.”

Additionally, ‘The All-American’ referenced the fact that Khamzat Chimaev has vowed to “smash” Kamaru Usman. Stann opined that as of this time, he doesn’t believe that Chimaev or any other fighter could walk into the octagon and decisively defeat ‘The Nigerian Nightmare’.