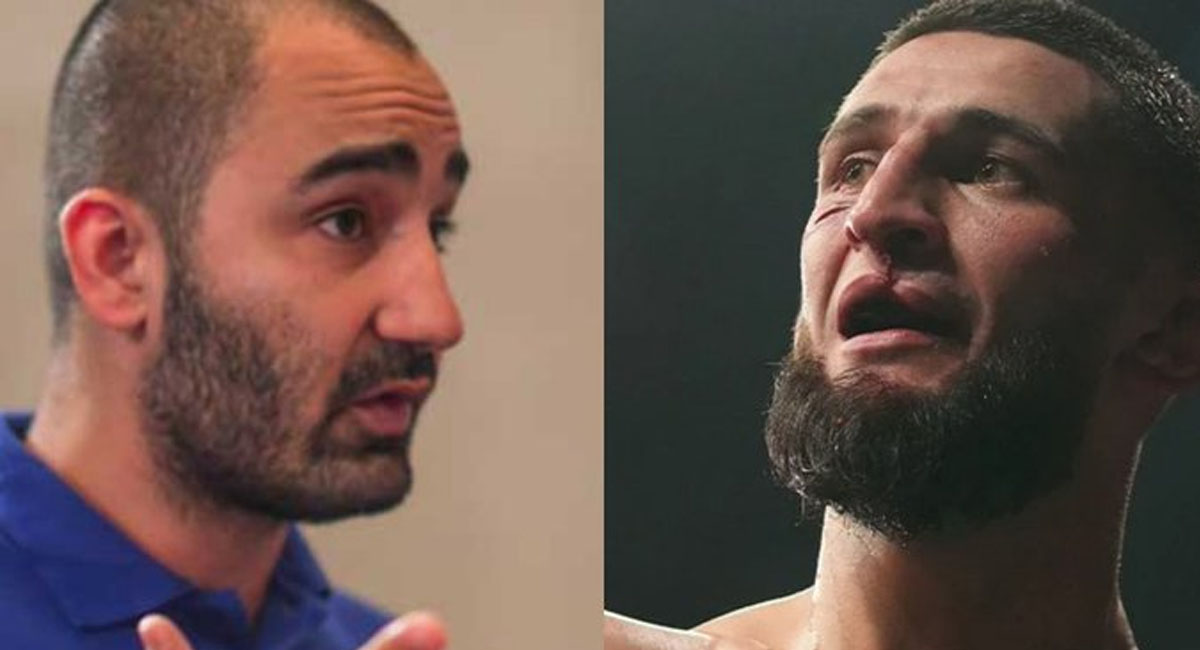 Khamzat Chimaev‘s coach has revealed what he yelled to “Borz” in the corner after the second round of his clash with Gilbert Burns at UFC 273.

Chimaev has long been touted as many things; top European prospect, future champion, future pound-for-pound king, future two-division titleholder, most promising up-and-comer in the UFC, etc. While some bought into that narrative and identified Chimaev’s skillset as one to keep an eye on, others have been reluctant to jump on the hype behind the Chechen-born Swede.

At UFC 273, Chimaev met the doubters head on by facing a serious step-up in competition. That came in the form of #2-ranked contender and former title challenger Burns. Across three rounds, the pair went to war.

On the scorecards of most, Chimaev took the first round but “Durinho” hit back in the second, proving he wasn’t going to be rolled over like his opponent’s previous four UFC foes.

That’s when Chimaev’s coach, Allstars Training Center’s Andreas “The General” Michael, delivered a message to his man that was about as firm as it could have been, leaving the commentators and fans wondering what had been yelled at Chimaev in the blue corner.

Now, days out from Chimaev edging the third round and securing a unanimous decision win, Michael has revealed what he shouted to his pupil ahead of the final frame in a post on Instagram.

“People ask me what i told Khamza end of round 2 this is what i told him ‘stop brawling stop having a street fight use your straight punchs and keep it Easy, this is an Easy fight if you dont brawl all you have to do is keep him on your jab and have patience. Dont make it harder than it has to be’”

Michael went on to suggest he’d much rather Chimaev have kept the fight “boring and simple” instead of engaging in the kind of war fans were treated to. The coach said that his sole goal is to protect his fighter.

“Nothing else was needed just fast jab and sometimes a straight right keeping your distance reach, to not get hit with the hooks. Thats what i demanded from him. I told him to stop giving everyone a show and just keep it boring and simple,” wrote Michael. “To not force anything just be fast and light on his feet. This was the game plan all along. Easier than Wrestling and Easier than Grappling.

“In flashes we saw that. Gilbert with all respect is a tough gritty Brave warrior. All the love and respect to him,” continued Michael. “These guys gave a show to the public. But as a coach i dont Care about the public i Care about the easiest way to the WIN with the minimum damage. Thats My number One job to protect the fighter.”

While he won the third round on all three scorecards, given the exchanges he continued being a part of right up until the final horn, it’s safe to say that Chimaev didn’t completely follow Michael’s pre-round instructions.

Coach Andreas Says The Chimaev Hype Train Is Far From Over

It’s hard to comprehend the fact that despite fighting and beating the #2-ranked contender just five fights into his UFC career, and without having risen into the top 10 yet, Chimaev’s victory has been downplayed by a portion of the fanbase. Some have even suggested the fight Burns brought to “Borz” proved he’s not ready for the upper echelons of the division.

Unsurprisingly, the welterweight contender’s coach has hit back. Further into his Instagram post, Michael questioned how his man’s hype could have dissipated after defeating an opponent with the skills and credentials of “Durinho,” especially when Chimaev only extracted 40% of his performance, as Michael claims.

“Everyone talks about the hype train is over? How many fighters in the Begining of there careers not even against top ranked oponents had absolut lackluster performances in there career. Shall i rack Them up? Champions legends list goes on. This means nothing!” Michael wrote. “A famous basketball player told me Once its hard winning Damn hard! My opinion about this is that Khamza was 40% last night cause he went in with the mindset that he Wanted to knock him out and show everyone.

“Who cares about everyone! People only support and love you when your winning, so the only goal is the WIN! But like a warrior he Wanted a WAR. I was very upset becuase i believe and know what he can do. You havent even seen that Yet it’s scary!” Michael concluded.

While some may remain skeptical of his championship mettle, it’s perhaps safe to say that in the eyes of most, Chimaev’s performance at UFC 273 firmly established himself as bonafide contender.

With UFC President Dana White suggesting in fight week that a victory this past weekend would possibly see Chimaev move on to face two-time title challenger Colby Covington, it stands to reason “Borz” is one win away from a date with the welterweight king.