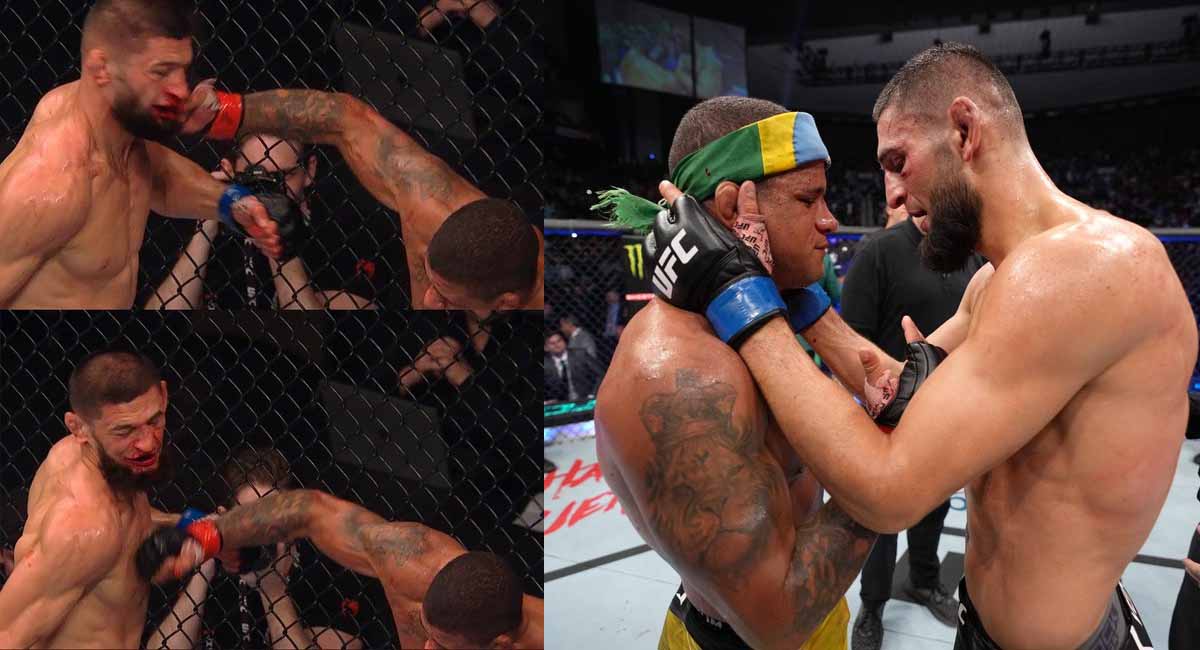 Khamzat Chimaev is fresh off his gutsiest performance yet and he has reacted to the war with Gilbert Burns.

This past Saturday night (April 9), Khamzat Chimaev shared the Octagon with Burns inside the Vystar Veterans Memorial Arena in Jacksonville, Florida. The welterweight scrap was featured on the main card of UFC 273.

Things didn’t exactly play out as expected, which ended up being a good thing in this scenario. Some fans were anticipating a dominating one-sided display from Chimaev, while others believed Burns would derail the hype train.

Instead, we got a three-round slugfest with both men earning even more respect than they had prior to their battle. In the end, it was Khamzat Chimaev who had his hand raised via unanimous decision.

Speaking with the UFC after the fight, Chimaev admitted that things didn’t exactly go according to plan.

“No, I did not expect it. I was trying to like — I was so excited for the fight. ‘He’s number two-ranked, I’m gonna take his whole head off.’ That’s why it wasn’t that good. My coach was — you can see in the middle of the round, he just came back, he said, ‘What are you doing? Work like we do.’ It wasn’t my best because I wanted to take his whole head off but you learn, ya know? I’m just going to war and dropped him, he dropped me and I came up and showed my heart. You learn a lot of things from these fights and I’m happy for that.”

While it wasn’t the dominating display he was hoping for, Khamzat Chimaev passed the toughest test of his career and proved he has the grit to last inside the Octagon.

He will shoot all the way up to the top five UFC welterweight rankings once they are updated.