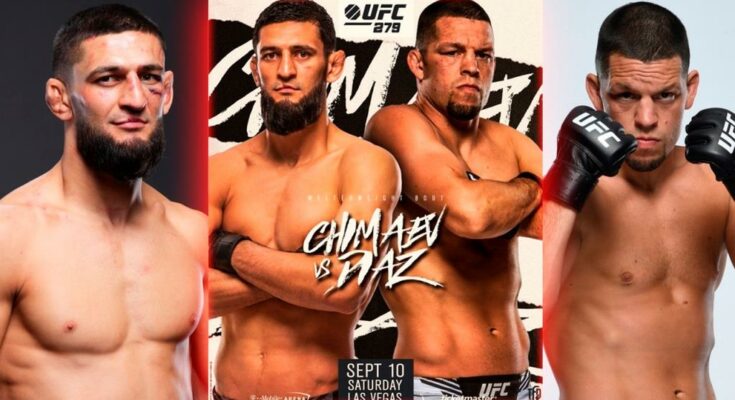 The undefeated welterweight, who’s currently No. 3 at 170 pounds in MMA Fighting’s Global Rankings, is set to fight Nate Diaz in the main event of UFC 279 on Sept. 10 at T-Mobile Arena in Las Vegas.

Since 2013, Diaz has made just eight octagon appearances, and his most recent — a unanimous decision loss to Leon Edwards at UFC 263 in June 2021 — was his first fight in 19 months after several fizzled matchups. So one can understand if Chimaev is skeptical about whether the fight is going to happen.

Khamzat Chimaev (11-0 MMA, 5-0 UFC) is excited about fighting a man he considers a legend of the sport but promises the fight won’t end well for Nate Diaz (20-13 MMA, 15-11 UFC). The undefeated Chechnan predicts a first or second-round stoppage victory after either knocking Diaz out or forcing the UFC veteran to tap to a submission.

Khamzat Chimaev’s game plan for his welterweight matchup with Nate Diaz is to go in and smash Diaz from pillar to post.

Chimaev’s only concern is that Diaz won’t show up on fight night. The latter has fought three times in the last three years and won just one of his last four fights.

‘Borz’ sent ‘skinny boy’ Diaz a warning ahead of their Sept. 10 matchup at T-Mobile Arena in Las Vegas, where both men are set to collide in the UFC 279 main event.

“I still don’t believe that guy’s going to come and show up,” Chimaev told Ariel Helwani during a recent appearance on The MMA Hour.

“I was in school when he was fighting in the UFC. It’s amazing to fight that guy, and I like him because for me UFC, when I was young, it was like the movies. Like, I’m not going to get there, I’m just going to see it. Now, I fight with the guys that I was watching. American guys, from Chechnya I watched them. Now, I fight with them,” Chimaev said.

“I just go in and smash his face. If we do striking, I knock him out, and if we go down, I submit him or smash his face, make him tap. We’ll see, whatever, for me it doesn’t matter. I don’t have some game plan and that s***. I don’t ask my coaches, I never talk about what I’m going to do in the fight. I just train what my coach said in my training. When we spar, if he says, ‘take him down,’ I take him down, if he says, ‘jab, move,’ I do these things – I listen to him.

“Then I go to the fight and I do exactly exactly the same I did in the sparring, and sometimes it’s take him down, submit him. Then I understand I have to do it in the cage as well when I come to the fight. This is my game plan, but you don’t see me, like, ‘Oh, he does this, he does that, he jabs like this, and this s***.’ I don’t believe in game plan or this s***. You fight like you fight.”

“One round, two rounds,” Khamzat said of his prediction on when the fight will end.

UFC 279: Chimaev vs. Diaz takes place on September 10 at T-Mobile Arena in Las Vegas, Nevada. It is the last fight on Diaz’s current contract, with The Ultimate Fighter 5 winner expected to leave the UFC after over fifteen years with the promotion.