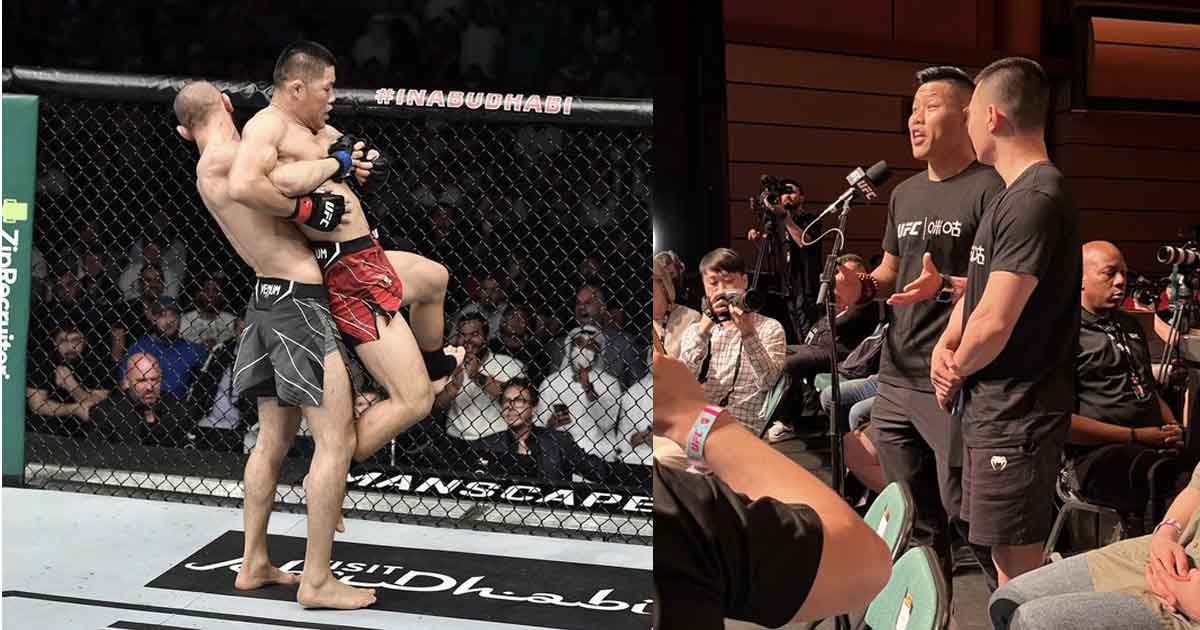 Khamzat Chimaev was present at the UFC 273 pre-fight press conference and answered questions from fans. Interestingly, one of the questions was asked by a fellow UFC fighter and Chimaev’s former opponent, Li Jingliang.

The Chinese national congratulated Chimaev on his rise in popularity in his country and asked the following question:

“I know you are good at using your strategy to win and your opponent Gilbert is a very well-rounded opponent. I guess you’re going to take him down in the very first [minute] of the fight, am I right?”

‘Borz’ was quick to dismiss the idea that he could only use his wrestling to dominate his opponent.

“I’m gonna kill that guy. I have power in my hands. I don’t care what I’m going to do and I’m gonna go jump in the cage and smash that guy you know. I don’t care, he will be down I smash his face, I will stand up I will knock him out, don’t care brother.”

Furthermore, the Chechen-born Swede went onto accuse Burns of not being a real Brazilian:

“That guy is not f*g from Brazil. I’m more Brazilian, I’m from Cantagalo. He is not Brazilian. He speaks English, he can’t speak Portuguese.”

Watch the full clip below:

Khamzat Chimaev took on No. 11 ranked Li Jinglang in his most recent outing at UFC 267. The bout ended in three minutes and sixteen seconds of the very first round when ‘Borz’ impressively submitted ‘The Leech’ via rear-naked choke.

Gilbert Burns on utilising his grappling skills against Khamzat Chimaev

During the UFC 273 pre-fight press conference, Gilbert Burns was asked about his chances of a submission win against Khamzat Chimaev. The Brazilian jiu-jitsu phenom was quick to express his confidence in his abilities.

“I think a good chance, you know. I think we’re gonna [at] one point of the fight we’re gonna wrestle, we’re gonna grapple. I think a lot of things will happen on this fight. I think it’s gonna be a lot of action since the beginning.”

Burns was interrupted by Khamzat Chimaev, who told him that the bout was going to be fought under MMA rules, not jiu-jitsu.

UFC 273 will take place on April 9 at the VyStar Veterans Memorial Arena in Jacksonville, Florida. It will be the UFC’s fourth pay-per-view of 2022 and is headlined by two title fights.

Alexander Volkanovski will defend his UFC featherweight title against former title challenger Chan Sung Jung in the main event. Aljamain Sterling and Petr Yan meet in a rematch that will serve as the co-main event. This time, undisputed bantamweight gold is up for grabs.