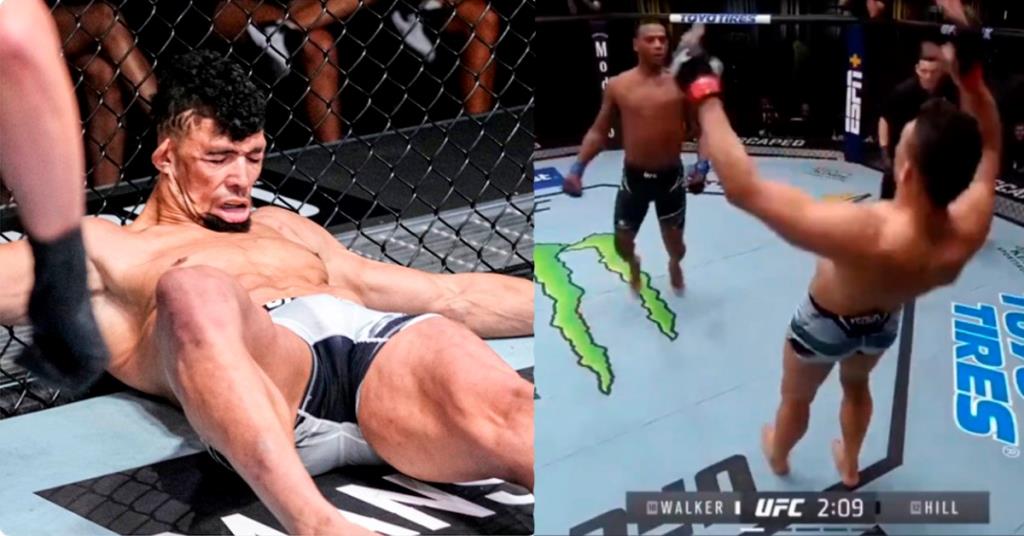 Brazil’s Johnny Walker found himself on the end of a devastating KO as he met Jamahal Hill in their UFC main event on Saturday night, providing a memorable image which soon became fodder for the MMA masses on social media.

The light heavyweight pair faced off at the UFC’s Apex for what promised to be a fan-friendly showdown, and which ended up being settled in concussive fashion inside the first three minutes of the opening round.

Walker had entered the cage shaking his hips and dancing, and started in typically entertaining style with some flashy head kicks.

Hill blocked the offensive before switching up his stance and timing his own assault perfectly, unleashing a mammoth right hand over the top which connected flush and seemingly knocked Walker out on his feet.

Hill followed up for good measure as his rival jolted backwards disturbingly before ending up against the cage with his chin squashed onto his chest.

The sequence made for a memorable image as MMA fans, fighters and pundits reacted online after Hill – who is nicknamed ‘Sweet Dreams’ – sent his rival to sleep.

“I timed that one coming forward,” Hill said of the finish.

“I just threw and it landed and it landed clean. Because if that one didn’t land, I had another one coming right behind it. It was good.”

Walker, 29 was gracious in defeat as he suffered a seventh career loss, and was seen embracing Hill after regaining his senses.

Hill earned a Performance of the Night bonus for his effort and moved to 10-1 overall in his career.

The 30-year-old Chicagoan stands 4-1 in the UFC with one no contest, since emerging through Dana White’s Contender Series to join the elite promotion.

If he carries on in the same vein, Hill could push himself into contention for a shot at the 205lbs crown.

“I’m ready to come for that [title],” Hill vowed after downing Johnny Walker.

“Right now, we’re going to see. I’m going to get with the head bosses and see what makes sense.”