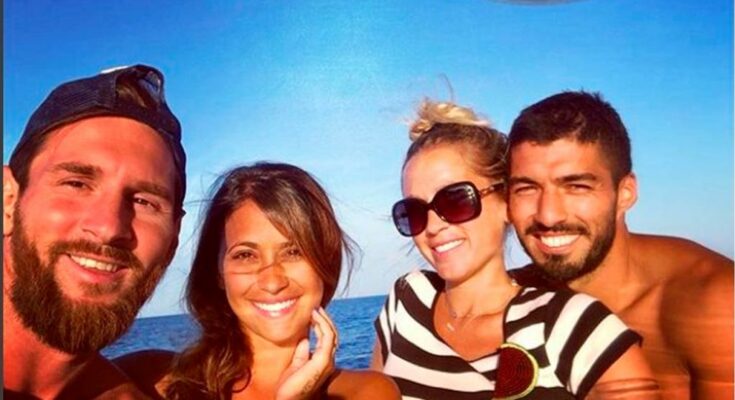 Widely hailed as one of the best players of this generation, Luis Suarez saw his contract with Atletico Madrid expire at the end of June, making him a free agent.

After weeks of speculation, Lionel Messi’s former Barcelona teammate and family friend Luis Suarez confirmed (on July 26) that he had signed a pre-agreement to join his boyhood club Nacional.

Lionel Messi and Luis Suarez’s families have been close since the two forwards’ time together at Barcelona.

They recently took a trip together to Ibiza, alongside another former Barcelona star, Cesc Fabregas, and his wife.

Suarez, who seems to be on the final lap of his career, will go down as one of the best strikers of all time. Recording 437 goals and 240 assists in 699 appearances across clubs in all competitions, he has won six league titles, one Champions League, and eight domestic cups, amongst other honors.

Following a successful stint with Liverpool, Suarez joined Barcelona in the summer of 2014. Messi, the undisputed king of Barcelona, made him feel at home, and the duo immediately struck up an enviable connection on the pitch.

They always knew where the other was, making it practically impossible for the opposition to keep them under wraps.

The formidable duo played 258 games together for the Blaugrana across all competitions, clocking in 20,699 minutes (via Transfermarkt). Lionel Messi combined with his Uruguayan teammate for 99 goals, making him the best wingman he has ever had.

During their six seasons together, Messi and Suarez won a total of 13 trophies, including a Champions League trophy, four La Liga titles, and four Copas del Rey.