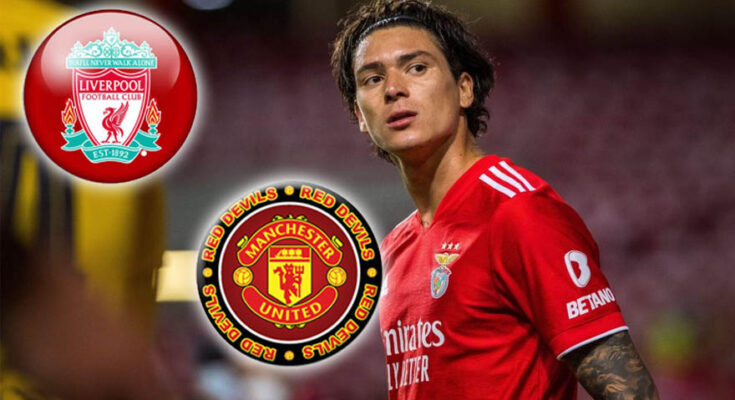 Liverpool reportedly have the upper hand over Manchester United in the race to secure the signature of Benfica forward Darwin Nunez, according to the Independent.

The arrival of Erik ten Hag will signal an overhaul of sorts for the Red Devils’ squad this summer.

Benfica’s Darwin Nunez has been namechecked by Erik ten Hag as a top target for Manchester United, with the club prepared to go toe to toe with Liverpool for his transfer.

The Uruguayan is seen as a suitable successor to both Luis Suarez and Edinson Cavani in terms of class, and would command a fee of around £100m, as one of Europe’s most prized players this summer. Benfica are aware of United’s interest, with Andreas Pereira having been broached as a potential makeweight.

Nunez is understood to have favoured Liverpool up to now, but his camp are prepared to listen to United, as the club engages in a new era under Ten Hag.

Darwin Nunez is currently one of the most sought-after forwards in Europe. The 22-year-old forward had an incredible 2021-22 season for Benfica, scoring 34 goals and providing four assists in 41 games across all competitions.

His recent good form has attracted interest from a host of European clubs, including Manchester United and Liverpool. According to the aforementioned source, however, Nunez prefers a move to the Reds over Manchester United this summer. His camp is still interested in listening to offers coming from Old Trafford.

It is worth mentioning that Darwin Nunez twice played against Jurgen Klopp’s side in the UEFA Champions League during the 2021-22 season. Benfica were drawn against the Reds in the quarterfinals. Despite the Portuguese side losing 6-4 on aggregate, Nunez impressed by scoring twice over two legs.

The Independent also reported that Darwin Nunez will cost interested parties upwards of £100 million in the summer transfer window. According to recent reports, the Red Devils made a huge opening offer for the Uruguayan forward, which also includes Andreas Pereira as part of the deal.

Nunez is touted as Erik ten Hag’s top priority in the transfer market as he aims to rebuild the Manchester United squad which had finished sixth in the Premier League.