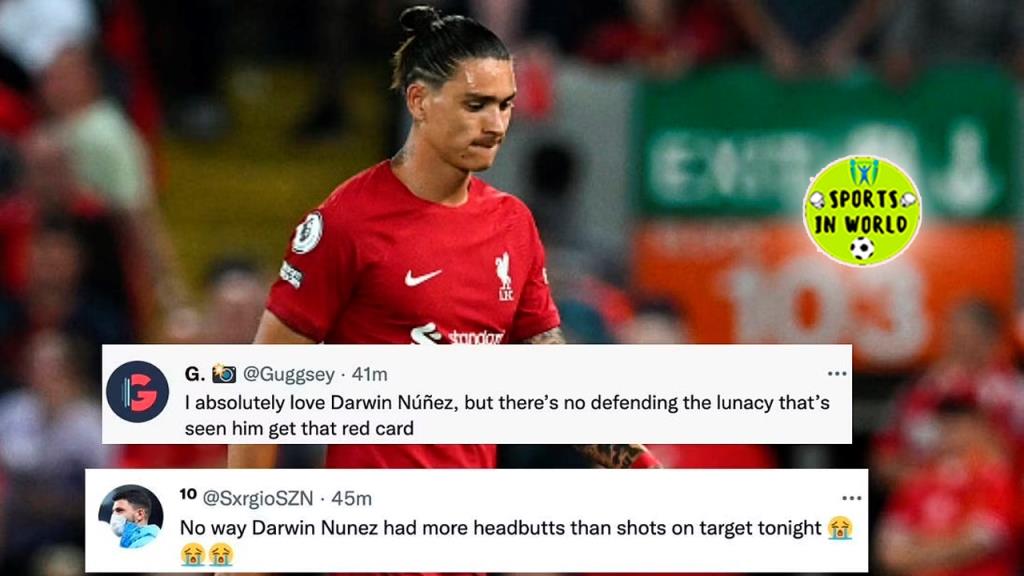 The Reds found themselves chasing the game at 1-0 down at half-time in their first Premier League game at Anfield of the campaign.

Midway through the second-half, Palace defender Joachim Andersen shoved Nunez following a cleared cross, before the 23-year-old striker responded with a headbutt.

Andersen went down and the referee had no choice but to send Nunez off to cap a nightmare home debut for the Uruguayan striker.

The attacker signed for the Reds in the summer for a club-record fee of €100 million from Benfica following 34 goals in 41 matches last season.

Nunez scored on his debut in the Reds’ Community Shield victory over Manchester City. He then netted on his Premier League bow in their 2-2 draw against Fulham at Craven Cottage last week.

His excellent start to life for Jurgen Klopp’s side led to his first start for the club against Palace. However, Nunez fell for the oldest trick in the book as he was goaded into a reaction by Andersen, who made the most of the incident.

The red card will now see the South American attacker miss the next three games through suspension. Following the incident, Liverpool supporters took to Twitter to vent their frustrations at the forward after his lack of discipline:

The Reds are still searching for their first Premier League win this season after they failed to break down a stubborn Crystal Palace side on Monday.

Despite dominating in the first half, Liverpool found themselves a goal down at half-time. It was all to an excellent finish from former Manchester United forward Wilfried Zaha after some good work by Eberechi Eze.

Nunez then received his bizarre red card in the 57th minute, which killed the mood inside Anfield. However, Luis Diaz stepped up just four minutes later as he finished sublimely after a mazy run.

The Reds continued to pressure Patrick Vieira’s side, but failed to find a winner despite creating some decent chances. Liverpool had 73% of possesion throughout the encounter and took 24 shots compared to the visitors’ seven.

Klopp has been severely hampered this week by a series of injuries this week and it showed in his team selection. The German was forced to start fringe defender Nathaniel Phillips, as well as veteran midfielder James Milner.

Klopp’s side will next face arch-rivals Manchester United at Old Trafford on next Monday, August 22.