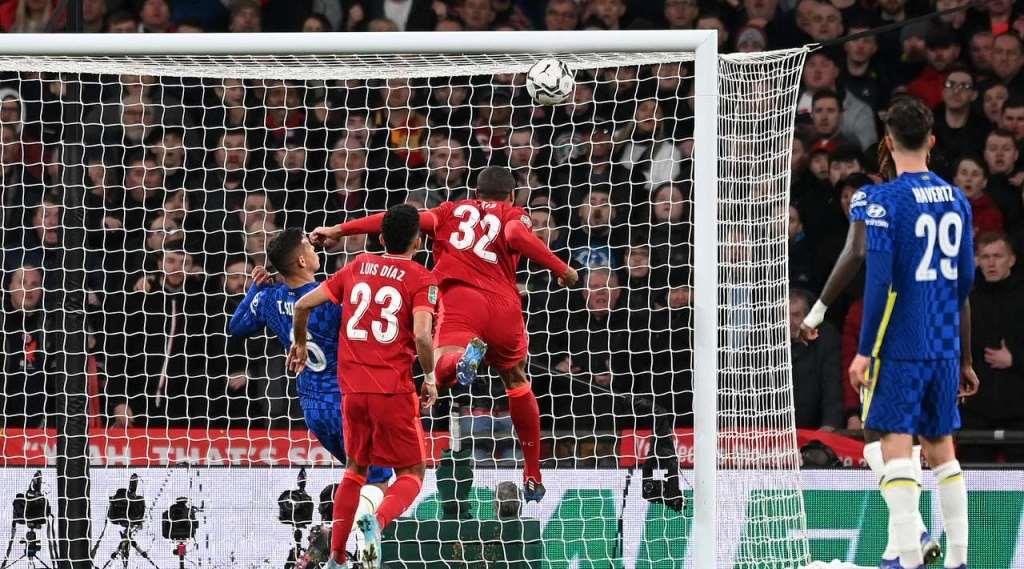 The cup triumph sees the ‘Reds’ win the trophy for a record ninth time, the most of any side in English football.

Jürgen Klopp wins his 10th trophy as manager, 21 years to the day since he first became a manager at Mainz.

Since the start of the century, no fixture has been played more than Chelsea vs Liverpool, and in their 190th meeting overall, they met at Wembley Stadium for the 62nd League Cup Final.

Tuchel’s Chelsea, who were chasing their third trophy of the season came up against Liverpool, managed by Klopp, the one manager that Tuchel has lost more games to than any other manager.

Chelsea came flying out the traps, playing with such intensity, and a high press, that Liverpool seemed nervous in the opening moments.

The early pressure from the ‘Blues’ almost paid dividends, as César Azpilicueta fired a low ball across the face of goal, to which the onrushing Christina Pulisic met, but his goalbound effort was brilliantly kept out by Caoimhin Kelleher.

The early dominance didn’t last for long though as the ‘Reds’ settled into their rhythm, and started creating chances of their own.

Edouard Mendy was equal to anything coming his way, and the Senegalese goalkeeper made a stunning double save just before HT.

First getting down low to deny Naby Keïta from range, he then quickly got back up to face his compatriot Sadio Mané, whose rebound from just a few yards out was incredibly kept out.

The second half began the same as the first, with Chelsea on top but failing to take advantage of their dominance. First Pulisic failed to get on the end of a teasing cross from Kai Havertz and just moments later, Mason Mount was played through on goal but he was denied by the woodwork.

Again, just like the first half, Liverpool came back with their own dominance, as Mo Salah came agonisingly close to opening the scoring. Through on goal, the Egyptian talisman dinked the ball over Mendy, but Thiago Silva made a brilliant recovery to clear the ball before it crossed the line.

The deadlock was broken minutes later as a well-worked Liverpool set-piece saw Trent Alexander Arnold’s freekick headed back across goal from Mané, where Joel Matip was there to nod in.

After a VAR review though, the goal was disallowed due an offside in the initial freekick. Both sides pushed for a goal but the tie headed to ET, just as the 2005 League Cup Final did between these two teams.

The intensity understandably dropped in ET, as both sides gave everything in a back and forth affair. Romelu Lukaku and Havertz both had goals ruled out for offside in ET, bringing the total to four goals ruled out over the 120 minutes due to offside calls. With neither side managing to find the elusive goal, the tie headed to penalties.

Both teams dispatched their pens with aplomb, with none of the outfield players missing, and it fell to the two goalkeepers. Kelleher smashed his spot kick in, and the onus fell on Kepa Arrizabalaga who was brought on to save the pens, but instead he missed the vital penalty, resulting in Liverpool winning the shootout and trophy.