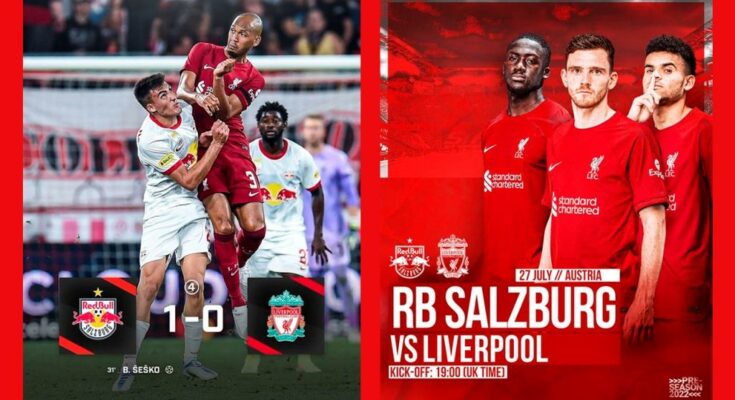 The Reds will play Manchester City in the Community Shield on Saturday. However, the Salzburg defeat punctures much of the momentum they had built in the last few days.

The Merseyside outfit had hit all the right notes in their previous two games before taking on Salzburg, demonstrating free-scoring form and new signings like Nunez showing signs of settling in.

However, it all went downhill in Salzburg, with Liverpool visibly underwhelming, struggling to finish off their chances and make their dominance count. That raises concerns ahead of the all-important clash at Wembley this weekend, with Klopp looking to win his first Community Shield after falling short in his first two attempts.

The Reds begin their new Premier League campaign on August 6 against Fulham.

Liverpool were beaten 1-0 by Red Bull Salzburg in a friendly on Wednesday, a result that angered their fans. Benjamin Sesko was the lone scorer of the night as the Reds lost their second pre-season game of the summer.

After a 4-0 drubbing against Manchester United, Jurgen Klopp’s side recovered well, netting seven goals against Crystal Palace and RB Leipzig combined, conceding none. However, they came undone in Salzburg on Wednesday, despite mustering seven shots on target and registering 75% possession.

Klopp fielded a highly weakened team at the start, with one eye on the Community Shield clash against Manchester City on Saturday. However, much of his first team later came on as substitutes, including Mohamed Salah, Roberto Firmino and Luis Diaz, but the Red Bulls held firm to eke out a win.

Liverpool fans were furious with their team’s performance. Some of them labelled it a ‘disgrace’, while others even called for Klopp’s sacking, trending the hashtag ‘kloppout’.

Darwin Nunez, who struck four goals against Leipzig, was in the starting XI but couldn’t find the net. Fans called him out too, suggesting the Reds should’ve rather signed Kylian Mbappe or Jude Bellingham.