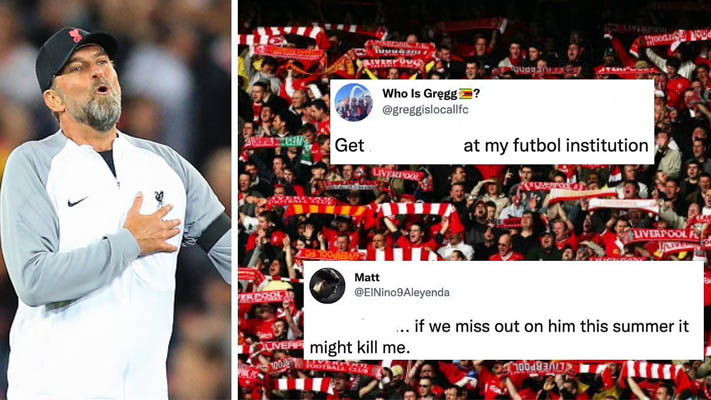 The Reds have been linked with Bellingham for some time now. As per the Daily Mail, they are expected to sign the Englishman in the 2023 summer transfer window.

During Dortmund’s visit to the Etihad in the Champions League on Wednesday (September 14), Bellingham proved exactly why Liverpool seem to want him.

The midfielder oozed class almost every time he got on the ball against Manchester City. He also went on to score the opening goal of the contest, heading home from Marco Reus’ cross in the 56th minute. It was his second goal in as many Champions League matches this season.

Liverpool fans quickly took to Twitter to laud Bellingham for his display, with one fan tweeting:

“Jude Bellingham has passed the Etihad test, bring him to Anfield at January whatever the price.”

“Bellingham is such a special talent. #UCL #MCIBVB“

Here are some more reactions:

However, the Englishman’s efforts were insufficient as Pep Guardiola’s side took all three points from the contest. John Stones brought City level in the 80th minute before Erling Haaland hooked the ball home against his former club four minutes later to complete the comeback.

Liverpool’s middling start to the season has largely been put down to fatigue as well as a lack of creativity from midfield. Fans have been crying out loud for the Reds to sign Bellingham as he could bolster an aging core at the centre of the park.

However, those worries were momentarily quelled as Jurgen Klopp’s side defeated a spirited AFC Ajax side in the Champions League on Tuesday (September 13). Thiago Alcantara’s return from injury revitalized the Reds, while Harvey Elliott also put in a decent performance.

Regardless of that display, however, fans of the club will likely still want the Premier League giants to sign Bellingham. James Milner, Naby Keita and Alex Oxlade-Chamberlain will all be out of contract next summer. Jordan Henderson, meanwhile, has endured an ordinary start to the ongoing campaign.

Bellingham would add depth, creativity and an eye for goal to Liverpool’s squad. The 19-year-old has scored 13 goals and laid out 18 assists in 99 appearances across all competitions for Borussia Dortmund.