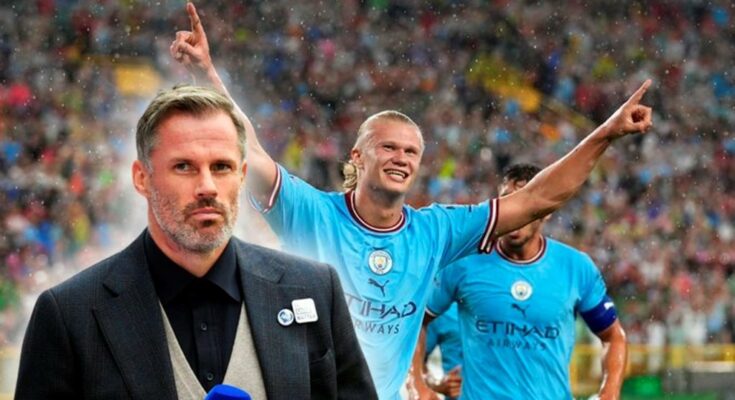 Pep Guardiola’s side snapped up the 22-year-old earlier in the summer after he scored an incredible 86 goals in 89 games for Borussia Dortmund.

Manchester City have won four out of the previous five seasons of the Premier League. The last two victories were claimed predominatley without a main centre-forward.

Carragher has argued that the team is already so dominant that the addition of Haaland won’t make that much difference.

“I still think Manchester City are favorites. But I don’t think Haaland is a game changer for them in terms of winning the league. They win the league now, they already get 95 to 100 points.

“I think that is the difference he will make. He won’t make a huge difference to the league because City are that good anyway. I think when you look at what Liverpool did to catch City and get to that level of 90 plus points, they bought Alisson, Van Dijk, they were game changers.

“They took Liverpool from a team who got 75 points to a team looking to get 95 points. City are already at that level so I don’t think it’s going to be like that for Haaland, but you’d think with a striker like him and the players they have around him, it will give them a great opportunity in the Champions League.”

The Norwegian international scored on his debut during the Cityzen’s pre-season friendly victory over Bayern Munich. It was the first time the forward has beaten the Bundesliga champions in his career.

Following his winner in Green Bay, the imposing striker struggled to hide his delight at finally getting one over on his great rivals, as he told reporters (as quoted by The Metro):

“[My] first time winning against Bayern, I have to say it’s about time!’ the 22-year-old told reporters after the friendly. Seven losses in a row. It feels good to win against Bayern. The quality is good, and it was also good to play against Bayern to get a real test before Liverpool in the week.

“As you probably all know I’ve been watching a lot of City games over the last few years and last year they were without strikers, so of course I’ve been seeing myself in these kinds of situations, so I’m not surprised [I scored].”