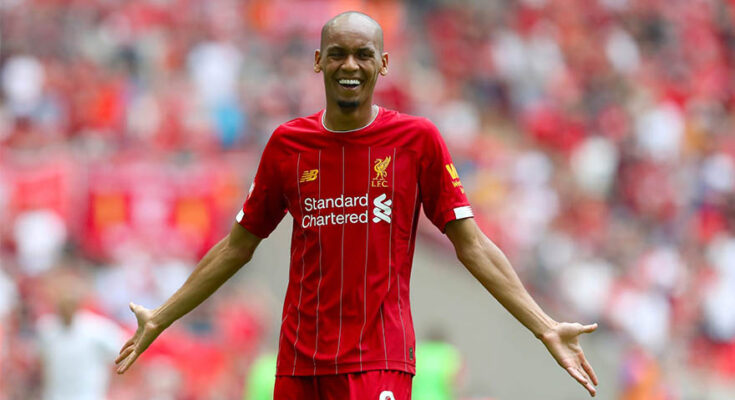 Liverpool midfielder Fabinho looks likely to be available for selection for the Reds Champions League final against Real Madrid in Paris on Saturday.

The midfielder went off injured with a hamstring injury in the Reds 2-1 victory over Aston Villa earlier this month and hasn’t featured in any of the Reds last three matches.

However, as per Mail Online, the Brazilian has been spotted training with the first team this morning, which is a positive indicator that he will play a part at the weekend.

Liverpool have been boosted by the return of Fabinho to training ahead of Saturday’s Champions League final against Real Madrid.

However, Thiago was a notable absentee from Wednesday’s open session at Kirkby.

Fabinho has missed the past three matches since damaging his hamstring against Aston Villa and is expected to start in Paris.

Thiago was forced off in Sunday’s win over Wolves due to an Achilles problem and remains a doubt for the final.

“I think he’ll be out of the final but I don’t know,” Klopp said after the club’s final match of the Premier League season, a 3-1 victory over Wolverhampton Wanderers at Anfield.

“He’s limping, so it’s maybe not the best sign.”

Centre back Joe Gomez was also seen to have taken part in the session, following his early exit against Southampton last week.

But Thiago was no involved, the Spanish midfielder came off at half time in his sides 3-1 final day victory over Wolves at the weekend, and at the moment looks unlikely to be fit in time for the Champions League showdown.