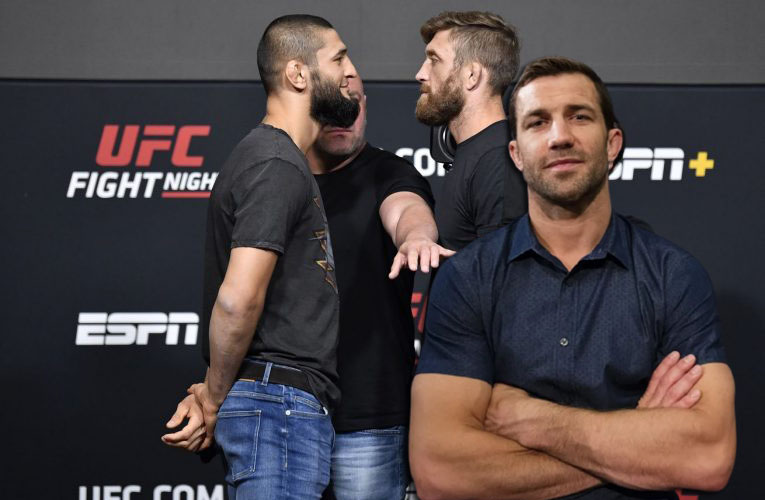 Aformer UFC champion claims that Khamzat Chimaev declined a proposed fight with him.

Former middleweight champion Luke Rockhold is preparing to make his Octagon return, heading back to his home at 185 pounds. Fans haven’t seen Rockhold in the cage since his trip up to light heavyweight in 2019 when he fought eventual 205-pound champ Jan Blachowicz. Rockhold lost the fight by second-round KO.

Rockhold is ready to work his way back into the title picture at middleweight and according to a report from MMA insider Ariel Helwani, the fighter was offered a main-event spot against Chimaev. Rockhold told Helwani that he accepted the fight, but Chimaev turned it down as the Russian plans on fighting at 170 pounds.

Luke Rockhold also said he accepted a three-round fight against “Borz” for August 7, but that’s not happening. “All respect but I thought he would fight anyone,” Rockhold told Helwani.

Chimaev has fought at middleweight twice in his three-fight UFC career, defeating John Phillips by second-round submission and Gerald Meerschaert by first-round KO, 17 seconds into the fight. After the Meerschaert fight, which happened in September 2020, Borz accepted a fight with top-ranked welterweight Leon Edwards. But since then, Chimaev has been sidelined due to lasting effects from COVID-19. He has said on several occasions that he hopes to return to the Octagon this summer.

On the other end, Rockhold told Helwani that he hopes to get back to action “by the end of the summer” and is eyeing a top-ranked middleweight.

Luke Rockhold Is 1-2 Since Losing His 185-Pound Title

After Rockhold secured the middleweight strap by finishing then-champ Chris Weidman in 2015, it appeared Rockhold was set to have a long title reign. However, he lost the belt in his first title defense to Michael Bisping by first-round KO.

Luke Rockhold bounced back with a win over former World Series of Fighting light heavyweight and middleweight champion David Branch, but he would go on to drop his next two fights. He lost to Yoel Romero and Jan Blachowicz by KO.

Although he’s not ranked in the top 15 of middleweight, Rockhold will likely score a big name for his return due to his popularity and success in the weight class.

Rockhold has a professional MMA record of 16-5, with 14 of his wins coming way of finish. He holds notable wins over Lyoto Machida, Michael Bisping, Chris Weidman and Ronald Souza.

Chimaev Is One of the Fastest Rising Stars in the UFC

Although Borz said many times that he would jump around weight classes in the UFC, it benefits him to pick a lane and work his way to a title shot. Chimaev has a lot of hype behind him due to the nature of his UFC wins, as well as his fan-pleasing personality.

Borz was scheduled to fight Leon Edwards three times and should he have defeated the No. 3-ranked welterweight, Chimaev would have been knocking at the door of a title shot with only 10 professional MMA fights. Chimaev will likely receive a ranked opponent for his next fight and should he get his hand raised, don’t be surprised to see the UFC fast track Borz up the rankings.