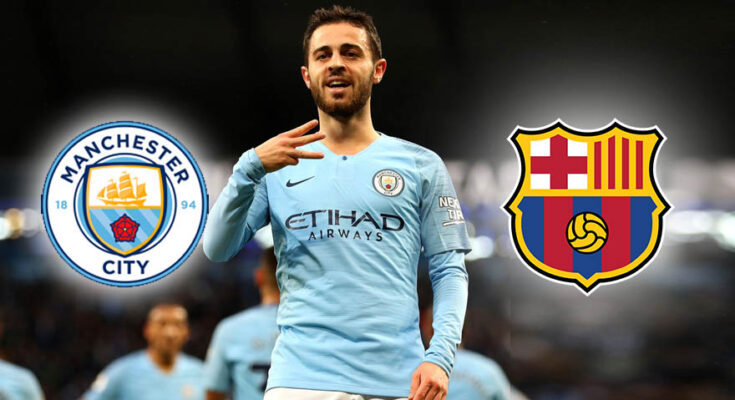 Manchester City attacker Bernardo Silva is prepared to swap the Cityzens for Barcelona this summer, according to reliable journalist Gerard Romero.

There were suggestions that Silva was keen to move away from the Etihad Stadium last summer. The Portugal international later revealed unhappiness with life in England as the reason for his desire to leave the club.

Manchester City and Portugal star, Bernardo Silva is claimed to be maintaining his stance on seeking an Etihad Stadium exit this summer, with a report suggesting that the player would be ‘delighted’ at the prospect of joining one European club in particular.

The Portuguese international was constantly linked with a switch to La Liga, with the likes of Atletico Madrid, Barcelona and Real Madrid touted as possible destinations for the understated midfielder.

While Bernardo Silva had later revealed that struggles living away from his family during COVID-19 played a major role in his desire to mull over a Manchester City exit, it is safe to say that his decision to stay at the club benefited all parties.

The 27-year old managed to surpass his incredible 2018/19 campaign by emerging as one of the most in-form midfielders in Europe, as City and Pep Guardiola were rewarded by his all-conquering presence that became key in retaining the club’s Premier League title.

However, Bernardo Silva went on to play an important role in Manchester City’s Premier League triumph in the recently-concluded season. The attacker made 50 appearances across all competitions for the Cityzens, scoring 13 goals and providing seven assists.

The 2021-22 campaign was largely a successful one for the 27-year-old. However, he still does not appear to be happy with his time in England if reports coming from Spain are to be believed.

According to Romero [via Barca Universal], Bernardo Silva is ready to put an end to his five-year association with Manchester City this summer. It is also said that he would be open to joining Barcelona ahead of the 2022-23 campaign.

However, the attacker has a contract with Pep Guardiola’s side until the end of the 2024-25 season. It would thus take a huge bid to lure him away from the Etihad Stadium, as per the report.

Given Barcelona’s current economic conditions, Silva could be an unattainable target for them. According to the aforementioned source, any move for the Portuguese would depend on Frenkie de Jong’s sale.

Selling the Netherlands international would boost Blaugrana’s funds and free up space on their wage bill. It now remains to be seen if they will cash in on De Jong to land Silva from Manchester City this summer.