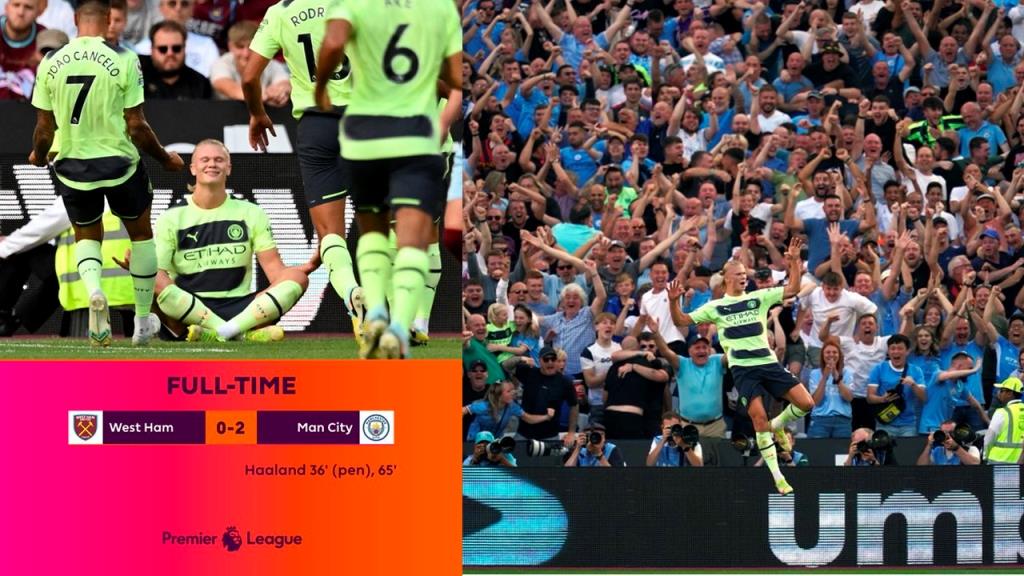 Manchester City striker Erling Haaland has already had a taste of strict British censorship after Sky Sports reprimanded him for swearing twice in a post-match interview and told him to mind his language.

Previously ridiculed for his misses in a Community Shield loss to Liverpool last time out, Haaland silenced his critics with a Premier League debut brace as defending champions City topped West Ham 2-0 at the London Stadium on Sunday.

While Erling Haaland might have been pleased by becoming the first City player since the legendary Sergio Aguero to score twice on his debut for the Mancunians, he was clearly deflated by not bagging a hat trick, which he communicated in his post-match interview.

Admitting that he was a “little down” after his display in the Liverpool defeat, Haaland humbly accepted he had made a “good start” to life in the English top flight.

When asked whether he was disappointed not to have netted a hat trick, though, he instead put the blame on himself rather than his coach Pep Guardiola, who brought him off in the 78th minute for positional rival Julian Alvarez.

Told by Sky Sports reporter Geoff Shreeves to be careful about his choice of words, Haaland apologized but managed to swear for a second time.

“S*** sorry! Not good language in this country,” he realized, as Shreeves laughed with him.

In later broadcasts of the interview, Sky Sports had to bleep Erling Haaland’s swear words.

Elsewhere, though, Guardiola was impressed by the Norwegian’s hunger for goals.

“That’s great I like it,” the Catalan said, when informed of the content of the 21-year-old’s interview.

“I was fortunate to be with [Lionel] Messi,” Guardiola pointed out, of his time together with the Argentine at FC Barcelona from 2008 to 2012.

“When he wants two he wants three, he wants four, five. Top goalscorers are never satisfied, they are hungry, starving, and want more and more. But at the same time I need to involve the new players,” Guardiola further explained.

Joining City in a £51 million ($61.7mn) deal from Borussia Dortmund after the Abu Dhabi-backed giants activated his release clause, Erling Haaland will look to increase a growing goalscoring account at home to Bournemouth in the Premier League on Saturday.